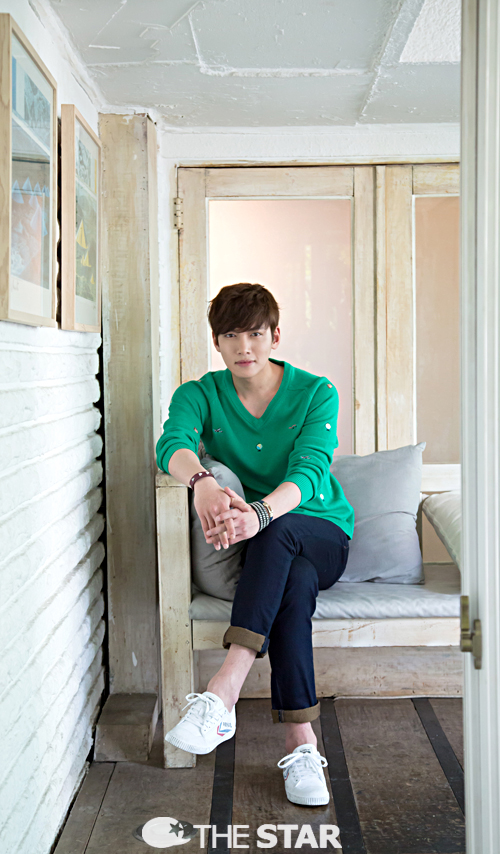 The man who only had eyes for one woman even till his point of death. In this modern age of high-speed consumption, such a person is hard to find these days. Because of its rarity, this is the kind of man that women of today dream of. A man who would only look at me; a man who loves me only. In the drama “Empress Ki”, Ta Hwan loved Seung Nyang, obsessed over her, and even in his dying moments, he wanted to hear her say the words “I love you.”  He was a man who believed in pure love.

Now that the 51-episode epic has ended, Ji Chang Wook has left behind a perfect character, such that it’s hard to imagine another Ta Hwan besides Ji Chang Wook’s Ta Hwan. However, Ji Chang Wook was the second choice for that role in fact. As the actor who was the first choice was unable to take on the role, Ji Chang Wook ended up joining the show late. Saddled with feelings of immense burden and thoughts of “there will be trouble if I don’t do well”, he focused on “Empress Ki” and Ta Hwan.

“Ta Hwan undergoes great changes in emotions even within one episode. He would be laughing in one moment, then crying in the next, and then shivering in fear. The shifts in emotions were drastic, so I had many discussions with the director and writer about how I should connect these, and whether I should give some foreshadowing while changing gradually. If you just compare the beginning and the end, Ta Hwan seems to have changed into a totally different person. I was very troubled by how I should portray this change.”

Is it possible to hold on to and love a woman who doesn’t love you? Just like receiving a piece of homework that cannot be completed, Ji Chang Wook’s frank response to this question is that Ta Hwan’s love is a fantasy that does not exist in reality and he thinks that undying love is impossible.

“It’s possible for one to have romantic notions about eternal love when watching the drama. Similarly, ‘Doctor Stranger’ is a story about doctors, but doctors don’t look that cool in reality. That’s why doctors are called professors, not oppa. Because it is a story about doctors that will never happen in reality, it becomes more exciting and interesting, so the show was probably made this way with that in mind. When I was acting as Ta Hwan, I felt envious. Although I also wish to love like that in reality, I wondered if I will have such a woman, and if a woman whom I want to give my all to ever appears, I wonder if my life will still be normal.”

The reason why Ji Chang Wook chose to star in “Empress Ki” was because he found the character Ta Hwan very attractive. “In the script, Ta Hwan was cute and adorable, weak and immature, but he wasn’t hateful.  I thought this character would allow me to do many things that I wanted to do. He was actually a nuisance character who wouldn’t be beneficial to the female lead in anyway, but I had to portray him in a lovable way. It wouldn’t be interesting if I was hateful, so I pondered a lot about this aspect and it was the hardest part for me. Depending on how I portray the character, a subtle difference would make the character turn out differently.”

Ji Chang Wook, who had immersed into his role quickly and portrayed it perfectly, drew many praises for his passionate acting that even anti-fans would acknowledge. However, he is still embarrassed about the praises he has received from the audience and the feeling is unreal to him. During the time when he had won a lot of love through the drama “Smile Donghae”, he often thought “if only I was just called Donghae instead.” As time passes, he now feels that “it is not a bad thing for an actor to be remembered through his works, that is only natural.” Be it whether he is called Ji Chang Wook or remembered as Ta Hwan, “to be remembered by someone is in itself something that one should be happy about,” said Ji Chang Wook with a look of serenity on his face.

“No matter what show I do, they all have something worth learning and are always helpful for me. One’s acting will not improve suddenly just because of one show; it is gradually built upon. Regardless of whether a show does well or not, because there are many things to learn, it helps to shape who I am now, and also shapes who I will become in the future. There are many people who ask me what is the turning point in my life, but I think the Ji Chang Wook before and after ‘Empress Ki’ are exactly the same. There isn’t a big change right? I personally think my acting has been changing very gradually all this while.”

From the perspective of a fan, it is natural that fans wish to meet their actor through various channels. An actor whom you see on shows will give off a different feel through pictorials, and there is also an anticipation to see the unpretentious, natural face of stars through variety shows. Ji Chang Wook is indeed well aware of such wishes of his fans and has considered appearing in variety shows, but he has this worry that the public would see him as the characters from his shows, and he also wonders if this matches his acting philosophy.

“My philosophy in acting is not to be swayed by the public and to just concentrate on my own acting. That doesn’t mean that I am turning away from or ignoring the public. In the past, I would read comments and change my acting style, but it is difficult to keep changing it and I would end up losing myself. If the thoughts I had back then got swayed by the public, I realised that ‘the actor Ji Chang Wook would cease to exist’. When I look at my seniors, they each have many different kinds of philosophies. Just like the seniors, I am in the process of presenting a style of my own. ”

To Ji Chang Wook, who lived for eight months as Ta Hwan who craved for Seung Nyang’s love, we cautiously asked him, “you must’ve felt the urge to date right.” With that, Ji Chang Wook said with a smile, “yes I wanted to” and “even though I was itching to do so, I couldn’t because I was too busy. Occasionally, there were even times where I don’t even try to do so. Dating seems very difficult.”

“As there are many men and women on this earth, I don’t think there are many who will be coming just for me. That’s why dating is even harder. Actually, the lack of time is the biggest problem. We can’t see each other often and my life runs on an irregular schedule. Even if she is understanding, I think I dislike it? (Q: What if you date a celebrity?) That’s even more impossible, because both will be equally busy. If two people are physically apart, the heart will also grow apart. I think ordinary love is like that. The kind of love in dramas is a fantasy.”

In a reality filled with impossibilities, Ji Chang Wook has created a character that has made women want to believe in a 1% chance.  Having risen rapidly with the success of his character, we await to see what kind of character Ji Chang Wook will have in his next work that will capture the hearts of women.

4 thoughts on “[Interview] The Star – Ji Chang Wook “A fantasy-like romance, is that possible in reality?””