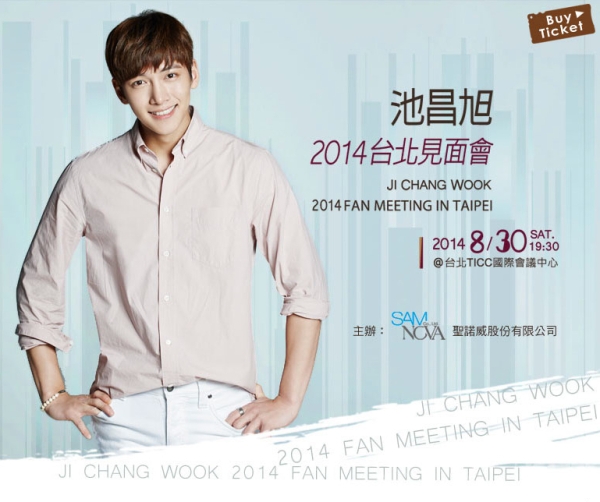 “Empress Ki” has been receiving widespread popularity in Taiwan recently, having attained record-high viewership ratings even before ending its run. Ji Chang Wook is now receiving lots of interest there because of the drama, so it comes as no surprise that he’s finally going to hold a fan meeting in Taiwan.

His first-ever fan meeting in Taiwan is slated to be held at the Taiwan International Convention Centre on 30 August, and tickets are expected to cost between 1,400 – 4,600 Taiwan dollars.

Tickets will go on sale at 12pm on 15 August at Gmusic.

His visit to Taiwan with “Running Man” this time is supposedly meant to drum up publicity for his Taiwan fan meeting. There are no details as of yet about what he will be doing at this fan meeting. We will update again when there’s more information.

Added new promotional materials from GMusic Events.  You can find all ticketing information at their site here:  GMusic Event Ticketing

Due to disagreements between Glorious and the Taiwan event organiser, tickets will not go on sale at 12pm today as previously announced. Details of the event will be revised and tickets will be released for sale at a later time/date.

After many conversations between the agencies, tickets went on sale at 2:00 PM Taiwan time.  Sales have been brisk, but not outstanding.  So the Guest of Honour has filmed a promotional CF for the upcoming event: