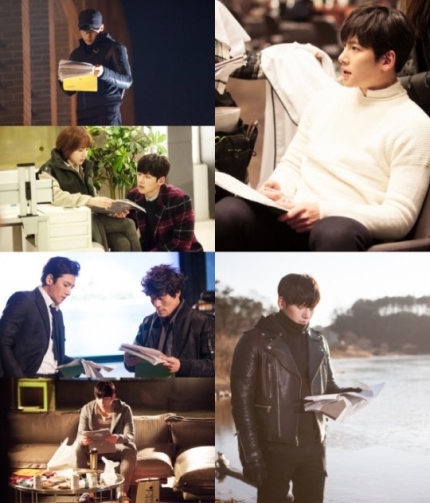 The production team of “Healer” revealed behind-the-scenes stills of Ji Chang Wook absorbed in analysing his script without taking his eyes away from it.

In the revealed pictures, Ji Chang Wook is seen concentrating on his script in various appearances just like his ever-changing character in the show. The first is his charismatic appearance as the professional courier Healer. Even under a small light in a dark night, Ji Chang Wook’s passion not to leave out a single detail can be seen.

When he’s the clumsy junior Park Bong Su, he sticks himself next to his senior Chae Young Shin, seeming like he has already gotten into his Park Bong Su character, showing a 100% synchronisation. Prior to filming, the two actors have already discussed about the scene, and one can see the secret behind the two actors who show strong chemistry in their passion for acting.

Lastly, unlikely the character Seo Jung Hu who has no concern for the world, Ji Chang Wook shows total interest in his script. Even in the noisy environment as preparations were made for filming, Ji Chang Wook quickly gets into character when he lays his hands on the script and meticulously checks through his lines in the script.

In particular, the sight of him and Oh Gwang Rok looking at the script with a serious look in his eyes, took place during the break time when they were filming the much talked about emotional scene in episode 10, and his passion for acting did not stop even during the break.

The production team of Healer said, “Ji Chang Wook acts an ever-changing character but doesn’t show negligence even during break time. He devoted his time to the script and concentrates on studying his character meticulously. The unlimited charm of Ji Chang Wook who constantly puts in hard work will continue to fill up the rest of the drama, so please look forward to it.”