The more you look, the more you fall in love with the man Ji Chang Wook

After “Smile Donghae” ended, he was called “Donghae”, his character’s name in the show. When “Empress Ki” ended, he was engraved in people’s minds as Ta Hwan. Now, he is “Healer”. This is about the actor Ji Chang Wook who returns as a completely different character every time. 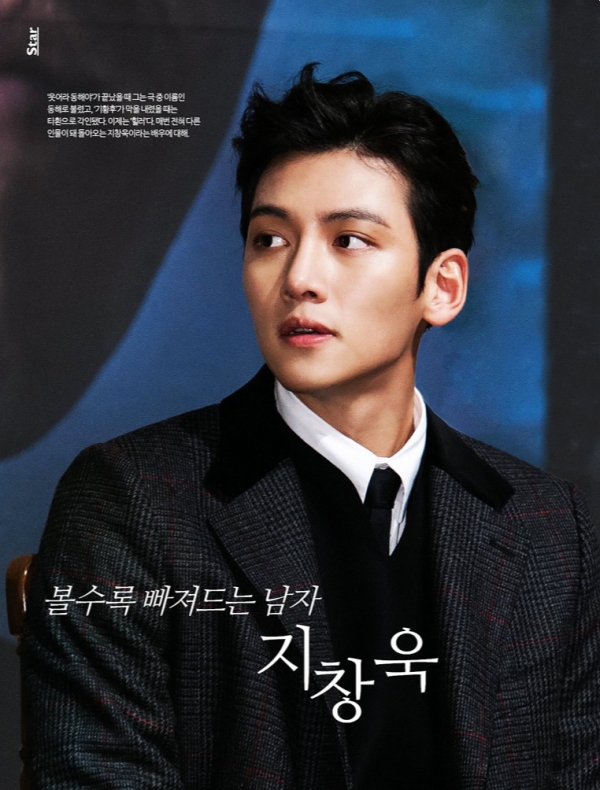 Although it’s cliché to use the word “eight-coloured bird” (*a korean expression to describe someone with multiple kinds of charm), Ji Chang Wook is an actor who matches this expression perfectly. From a spirited youth who came from USA and a sword-wielding warrior, to a king whose eyes are opened by love and matures, he has no overlapping characters. Even in his comeback project “Healer”, he plays a fresh character who exceeds the expectations of fans.

“It’s a drama that is interesting and satisfying at the same time, and moving also. Because I get to work with a good scriptwriter, director and seniors, I feel excited like I’m going to a picnic whenever I go to the film set.”

The KBS-2TV Monday-Tuesday drama “Healer” is jointly produced by the scriptwriter Song Ji Na who wrote “Sand Glass” and director Lee Jung Seob who directed “Baker King Kim Tak Gu”. To borrow the words of Writer Song, this is “a story about the children of the Sand Glass generation who confront the world that their parents left behind.” Not just the actors, but the director is also excited about working with the woman who wrote the legend. (*To those who are unaware, “Sand Glass” was a highly successful drama by Song and has an almost legendary status in Korea)

Director Lee said, “I dreamt of becoming a director after watching ‘Sand Glass’, so receiving a script from Writer Song was just like a dream. She writes the inner feelings of her characters in great detail, so we have to study the script in greater detail up to 10 times harder than other dramas. (laughs)”

In this drama, Ji Chang Wook plays the role of a courier Seo Jung Hu who operates with the code name “Healer”. He receives an assignment to investigate internet reporter Chae Young Shin who has both tenacity and craziness but bears a painful secret within, and his life starts to intertwine with hers.

“Since my role is a night courier, there will be a lot of action scenes. Although there are stuntmen around, I think the scenes will be smoother if I do the stunts myself. Except for the highly difficult scenes, I am currently doing the action scenes on my own. Just running, flying and rolling are nothing much. (laughs)”

He is working with Yoo Ji Tae, who is acting as a star reporter, and veterans Park Sang Won and Do Ji Won to create a proper drama. There is warm response from the viewers who are seeing the best actors all in one drama. Not only are the leads receiving praises for their acting in every episode, viewership ratings have been around 8% with five episodes aired so far, and it has maintained the second spot in the Monday-Tuesday timeslot. (*This magazine was published a couple of weeks ago)

Another focus in “Healer” is none other than Yoo Ji Tae. After debuting in 1998, he could only be seen on the big screen most of the time, and he is returning to the small screen 7 years after starring in his first drama SBS’ “Star Lovers”. He decided to star in the drama without much hesitation upon receiving Writer Song’s suggestion.

“I want to become an actor with character. It’s not that I’m intentionally avoiding dramas, but I choose projects by looking for characters with special qualities, so I often acted in movies.”

Having acted in several independent films such as “Mai Ratima” and even worked as a director before, its thanks to him that we learn more about the production environment and hard work of the staff.

“The film ‘The Tenor’ that I filmed recently is an independent film. Because it wasn’t a commercial film, the production was not financially strong and it was difficult. Once you’ve experienced that a few times, you develop a compassion to withstand everything (laughs). Although people say that it is also tiring to film dramas, I am fine with it.”

The both of them are alumni of the theatre and film department at Dankook University. Ji Chang Wook had heard a lot about his senior Yoo Ji Tae back in school, and chose him as an actor whom he wished to work with at least once someday.

“Ha Ji Won noona whom I worked with in ‘Empress Ki’ is also a school senior. We were able to get closer quickly because we had something in common, so I’m also looking forward to getting closer to senior Yoo Ji Tae (laughs).”

Before filming the drama, the two of them had humble expectations for the viewership ratings. They think that ratings are up to the gods to decide, and the atmosphere at the film set is more important.

“The two of us talk a lot about the atmosphere at the set being the most important. Because viewership ratings can do well or do badly, we do not bother about it but we try to work on making good memories together instead.”

After working on several key projects since his debut at the age of 20, he has eventually become a dependable actor in his 20s without realising it. Of course, he was able to rise up to that position thanks to his hard work and his inner self who does not indulge in fame. This is also the reason why we love Ji Chang Wook so much.

This was a very short magazine feature, with only one photo.