In the dramas “Smile Donghae” and “Empress Ki”, Ji Chang Wook won the Excellence Actor award from KBS and MBC respectively with his outstanding acting abilities, but the show that gave him widespread popularity across Asia is still the drama “Healer”. This drama showcased the romance typical of Korea dramas, and also combined comedy, intrigue, and other elements, describing the story of a courier named “Healer” who disguises himself as a reporter to find out about the past and finds true love at the same time. When asked what was the charm of Healer Seo Jung Hu that attracted him, Ji Chang Wook said he likes this kind of role that has a concrete image and also is fun at the same time. “Seo Jung Hu was lonely at first; he does not like being with other people; all he wanted was to earn money to buy a deserted island and live there alone, until Chae Young Shin appeared in his life, he started to protect and love her, and steadily opened up his heart to her. The character went from cold to one that understands others, and even loved others. This process greatly touched me, giving me a lot of room to explore and find out his inner self.”

A bit more time to think

After “Healer” finished airing, Ji Chang Wook continuously went about with various schedules and interviews. He said he was a bit at a loss of what to do and felt uneasy when “Healer” first ended. As days went by, he is a little more relaxed now, and finally has the feeling of having walked out from the show. Ji Chang Wook has always shown himself to be someone who is serious about work and meticulous, but strongly denies that he is a perfectionist. He says he enjoys thinking, and his desire to perfectly portray his role leads him to read the script multiple times, and he gains a new understanding each time he re-reads the script. “I’m not a perfectionist, and I’m not such a meticulous person in reality either. There is always a period of time after filming where I have to give all kinds of interviews, and each interview allows me to reorganise my thoughts and recall what happened during filming. This is a process for me to wrap things up, and interviews are always able to create such a spark for me, so for me, giving interviews is exceptionally meaningful.”

A life with many variations, an interesting role

From Donghae in “Smile Donghae” who grew up in a single-parent family, the unrivalled warrior Baek Dong Su in “Warrior Baek Dong Su” who is reckless but kind-hearted, the crazy but obsessively in love Yuan emperor in “Empress Ki”, to the recently ended “Healer”, the roles played by Ji Chang Wook have been fresh with unique personalities.  He says he hopes to get a richer acting experience. Be it a periodical or modern show, he is willing to challenge different kinds of roles, and hopes to present his characters as differently as possible. Seven years after debuting, he shows matured acting, and this has to do with his strong foundation in musicals and his serious attitude towards studying every piece of work.

Ji Chang Wook once said, “Musicals are the most meaningful, but I need to act in dramas and movies if I want to gain more recognition from the public.” Each time he is asked by the reporter about his previous answers, his thoughts have noticeably become more matured, and he nods and replies with a smile, “Now, I think acting in musicals and dramas are both meaningful. Stage performances must be completed in one breath, and it has the charm of a ‘live broadcast’ with the audience seated in front, but it cannot capture as much detail as the camera. For example, the audience may not be able to catch everything that the actor does, but dramas and movies are different as details can be portrayed in greater detail when facing the camera. To me, both have an entirely different kind of charm.” The current Ji Chang Wook is an actor who is not constrained — style, subject and role are not his criteria for choosing a script — as long as he likes it, he will be able to devote his entire self to a new role. “What is the criteria of an interesting character? This is in fact a very subjective question, so I will always consider three aspects when choosing a script — whether the project itself is attractive to me, whether the role looks charming to me, and whether I have the confidence to do a good job with this role.” 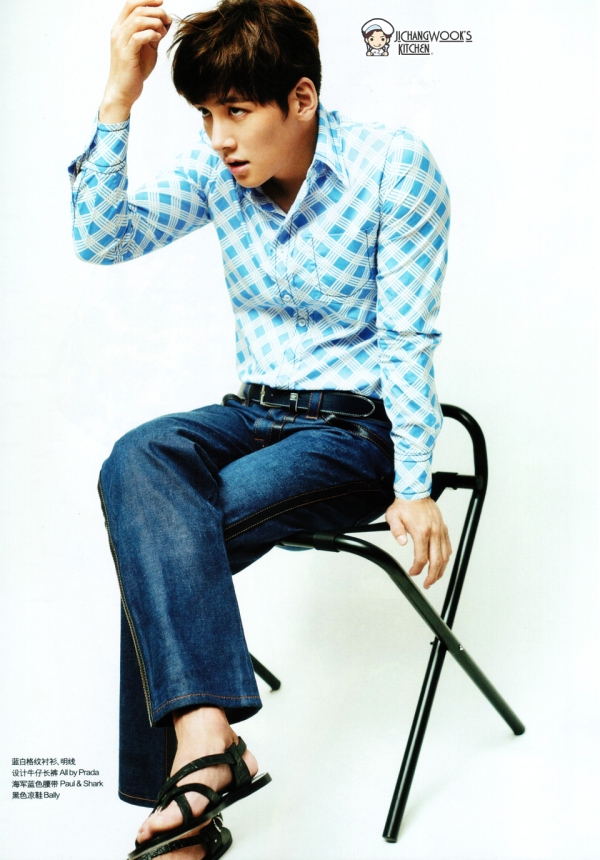 Speaking about the recent trend of Chinese-Korean joint productions, Ji Chang Wook said, “I think this kind of cultural exchange is meaningful, I hope to work with Chinese actors and directors too if there is an opportunity.” When asked about which actor he wishes to work with, he said, “Julian Cheung. I met him at an event. Although we only had a brief exchange, I feel he is an excellent actor.”

Ji Chang Wook desires to become a good actor, he says “good actor” is a very broad concept and he is unable to define it either. He only hopes that audiences and seniors will say “He is a good actor” whenever they mention him. “I hope that when I look back several years later, I will be able to honestly call myself a ‘good actor’, and that is enough.”

It is hard to imagine that the bright, handsome and outstanding Ji Chang Wook once thought of giving up his acting career, because he thought he had no talent for acting at all and was pessimistic. How was he able to persevere on? He said frankly, “Because apart from performing, I did not seem to be good in anything.” After the brief period of pain and after repeatedly questioning himself, he still decided to continue acting. “A senior told me, ‘How can there be such a thing as a gifted actor in this world? You will be able to realise your dream as long as you work hard.’ His words were like medicine for me who was suffering.”

Ji Chang Wook is not the traditional single-eyelid Korean oppa, but he with double eyelids and huge eyes is definitely a handsome guy, and his handsomeness is not uncouth or tiring either. He always maintained a kind smile and humble tone during the interview, and his behaviour was proper and well-mannered. He says he never thought of his good looks as his strong advantage, because there are too many tall and handsome people in the entertainment industry, and in order to gain his own footing, he can only work harder than the rest. “Actually I’m very ordinary, and I can only work harder because I’m ordinary. I need to persevere on if I want to be different from the rest. I think this can probably be considered a strength!”

“Suffering is unavoidable in life, and it’s especially so for acting. But to me, suffering in life is only for a moment, time will allow you to forget those suffering.” There is no difficulty in life that will not pass. Ji Chang Wook is someone who lives in the present. He says painful and suffering moments are inevitable, but they no longer become a burden once they pass. Every difficulty that you are facing is the hardest to overcome, but once they are resolved, the pain of the past will also disappear.

Not forgetting the original self

Following the success of “Healer”, Ji Chang Wook has sparked a new Hallyu wave in countries across Asia. With fame, it becomes even easier to slacken, after all, in an age where new stars are emerging so quickly, all those stars at the top will often have the fear of being lonely on top (高处不胜寒), and Ji Chang Wook is no different. He says that having popularity means that he is still receiving attention and love from the public, and he is immensely grateful for this and cherishes it. But if he focuses too much on this, it will not only tire the body and mind, it will also become easier to lose his true self. “That’s why I’m always working hard to find my balance, and I try not to place too much energy on maintaining my popularity. Exercise is a very good way to release myself. I like soccer, and I will play it about three times a week when I have time or at least once, for about two to three hours each time. It’s too hot in the day and easier to get tanned, so I often choose to play soccer at night. After dark, when the lights of the soccer pitch are turned on, running around at night makes me feel freer than ever.”

Debuting seven years ago, Ji Chang Wook has too many memorable experiences. The day before the Ceci photo shoot, he participated in the filming of Hunan TV’s “Happy Camp”. It was inevitable that he would have worries since this was his first time in a Chinese variety show, but the hosts of the show took especially good care of him and the games were also fun, making his trip to China a warm one. “On the day of recording, everyone showed genuine welcome for me and that happy atmosphere was very memorable for me. Coincidentally, it was He Qiong’s birthday, so everyone went for a drink after the recording and had a good time together.” 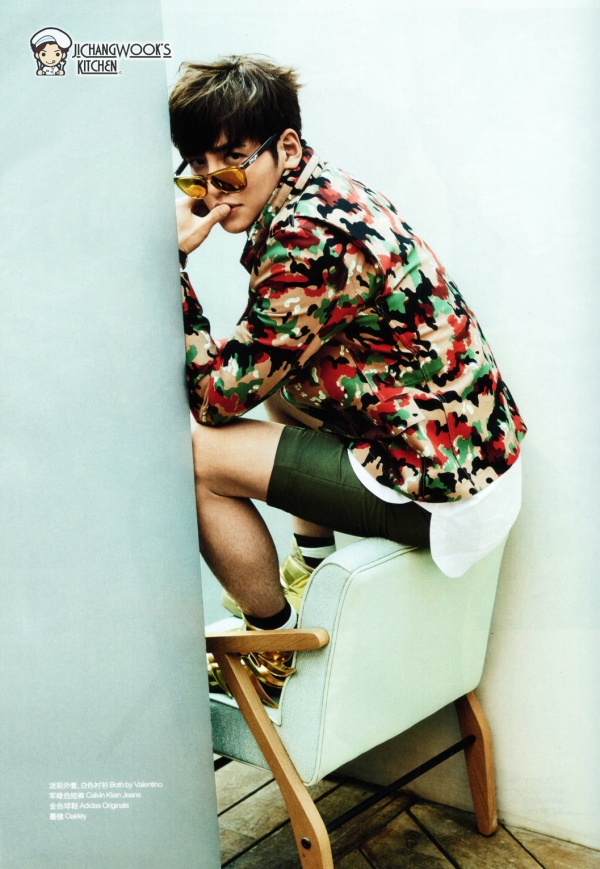 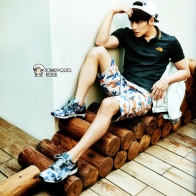 Scans and Chinese-English translation by Gabby. 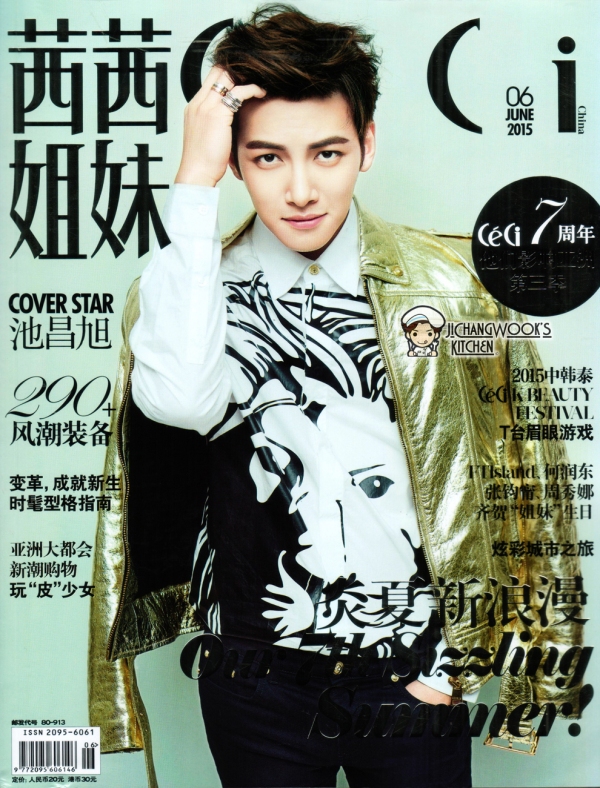