The Hallyu star that first comes to mind now is Ji Chang Wook. He always ranks high on the Hallyu star top ranking of the local media in China. He’s the star that comes hot on the heels of Bae Yong Joon and Kim Soo Hyun.

Fashion magazine Grazia asks him about the Korean wave in an interview with him and also did a photo shoot. Along with the interview, various experts also analysed the reasons for the popularity of the top 9 Hallyu stars right now.

In the interview, Ji Chang Wook talks about his Hallyu activities. When asked about the popularity of the Hallyu wave, he said “It’s probably because of the dramas. They are loved because the drama characters are likeable. Before knowing about the person Ji Chang Wook, they first come into contact with the character. ‘Empress Ki’ and ‘Healer’ are very popular in China. I suffered a lot when filming both shows, so it’s fortunate. The suffering paid off (laughs).”

He’s also holding fan meetings in Asia. He chose “songs” as the repertoire of his fan meetings. “I sing about 10 songs. There are about one or two segments where I sit down to play games or talk. Singing is comfortable, and everyone likes it.”

Ji Chang Wook’s pictorial and interview will be released on 5 September and you will get to see him in the September volume 2 issue of Grazia. 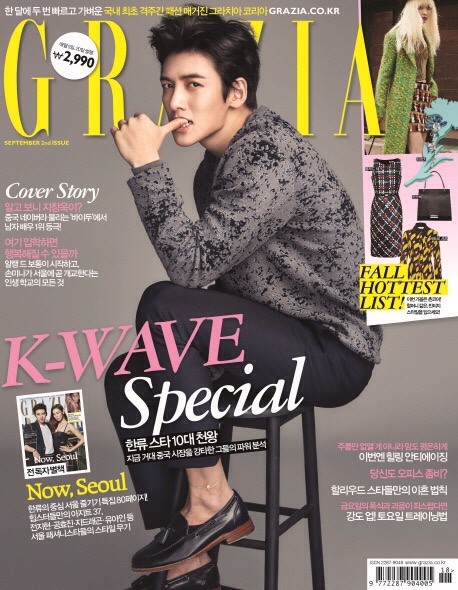