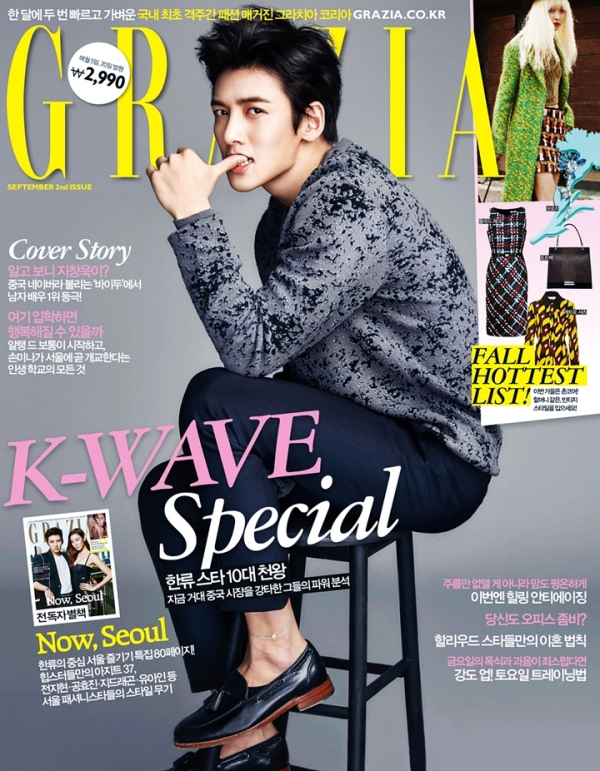 Q: I heard that a “Ji Chang Wook exhibition” was held?
Exhibitions of Hallyu idols have always been held at the Gangnam Tourist Information Centre, but I’m the first actor to have such an exhibition there. I’m embarrassed.

Q: Honestly, it feels rather good right?
The word “exhibition” alone (laughs) is really embarrassing. It was nothing much. I’m thankful that people even come to view my photos and the items I use. I’ve always liked soccer, so it seems like soccer items were the most. I brought everything so there’s nothing left at home.

Q: You won’t be able to play your favourite soccer for the time being right?
I borrowed soccer shoes from my friends to play (laughs).

Q: How often do you play soccer?
I used to play almost every week, but I’ve been busy filming a movie recently so I haven’t been able to play much. But even then, I will try to run when I have time.

Q: Your Hallyu star ranking was selected by a media outlet based on search counts and voting, and you managed to rank among the top 5.
Ah, was there such a thing?

Q: You were ranked along with Kim Soo Hyun, Lee Jong Suk, Lee Min Ho and others.
Really? To be rated by that kind of ranking makes me happy. It also makes me feel proud of myself. I heard that the Chinese really enjoyed watching “Empress Ki” and “Healer”. I suffered a lot while filming those two shows, so it’s fortunate. Because all that suffering paid off (laughs).

Q: “Empress Ki” was a 2013 drama. Was there such a response from China since that time?
I didn’t know at all back then. It seems like the response was bigger for “Healer”. Even while filming “Healer”, I heard comments like, “This drama is very popular in China.” When the drama ended, I could really feel the (power of) Hallyu.

Q: The Chinese fans seem to be very enthusiastic. On your birthday, they had a bus covered with Ji Chang Wook, and they also aired a video with a message on an electronic display.
Probably because the Chinese fans are separated from me, so they did that to show me something. Whereas my Korean fans see me frequently all this while. I also do musicals for a long time, so they have seen me in person many times (laughs). 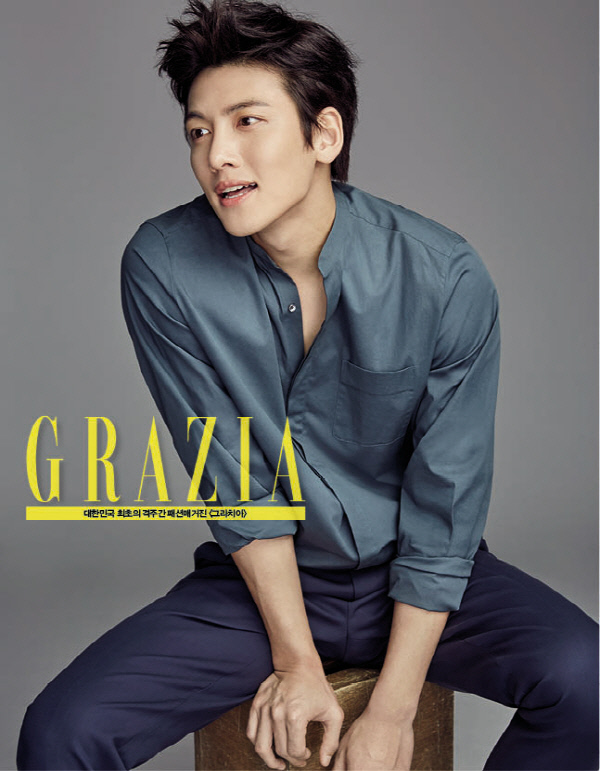 Q: Why do the Chinese fans seem to like Ji Chang Wook?
Hmm….probably because of my drama characters. They came into contact with the character first before they got to know the person Ji Chang Wook.

Q: Are you being humble?
Strictly speaking, other than dramas, I haven’t done any activities in China. It seems to be always the case for actors.

Q: Did you think of it as just closing your eyes and playing soccer?
I worried a lot, but at some point in time I was just sweating and running without thinking. Indeed, I have the confidence of doing it well if I have to use my body.

Q: Are you studying Chinese?
There is always a translator next to me. But even then, I try to at least say one word (in Chinese). I will do basic sentences like “mei guan xi (it’s all right)” or “ni chi fan le ma (have you eaten?) (laughs).

Q: Have you ever felt flustered by how Chinese activities are different from those in Korea?
I don’t know as of yet. Because I haven’t done that many activities yet. I will probably feel it as I experience them myself next time. All these are work done with humans after all, so there shouldn’t be any particular difference.

Q: You are also preparing for a Chinese drama right?
Although we are still in the midst of discussion, I think I will probably be doing it. I usually select my projects very realistically. No matter whether it is in China or Korea, I will do a project if it suits me.

Q: What kind of project will be suitable?
One that is interesting when I read it, and the character is appealing.

Q: You are going for a fan meeting tour around Asia right?
I will go to Hong Kong, Japan, Taiwan, Thailand and then China.

Q: Do you have a killer repertoire that you will be doing at your fan meeting?
I will sing about 10 songs.

Q: Ten songs?
There are about one or two corners where I sit down to play games or talk. Songs are comfortable, and everyone will like them more.

Q: Have you ever thought that you will become a Hallyu star?
Really, honestly, not at all.

Q: Why?
Because I’ve never even thought of it before. Because I’m an actor so I only thought, “I have to have fun acting and do performances”. When I first started acting, there was no such thing as Hallyu.

Q: Just like Bae Yong Joon?
Yes, something like him. At that time, Hallyu stars were uncommon, and not a lot of Korean content was being exported overseas. But as Korean culture started to get more global, a lot of people overseas ended up watching Korean dramas, just like how we watch American and English dramas.

Q: Is that the reason for the Hallyu wave also?
I think that had a big influence. There are more foreign companies who are looking for Korean actors these days, and the scope of activities seems to have widened. 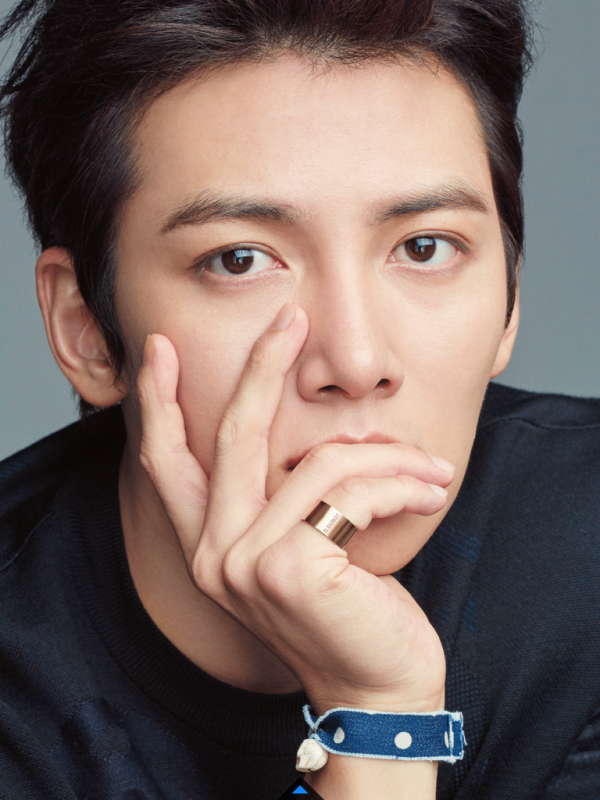 Q: What is the goal that you hope to achieve in your activities in China?
I don’t have a concrete goal… I just wish to do my best at any place that requires me no matter the country. Actually, when I first received offers for fan meetings in Japan, I rejected them all.

Q: Why?
I have to go all the way there and perform something… I seemed to have hardly any fans there, so I wondered why do I have to accept such an offer.

Q: So what was the reason for you going there eventually?
I went because people around me keep telling me to do it, and many Japanese fans will like that. They said they knew my name and even watched my shows. I received quite a shock back then.

Q: You were shocked?
Yes. Since they like me so much, coming over to greet them seemed like the right thing to do. When I was contacted from China, I also went with the same thought in mind.

Q: I heard that when you first visited Shanghai, so many people turned up till you weren’t even able to attend the Dolce and Gabbana event.
I was all prepared and was about to leave the hotel, but the person-in-charge said it would be better if I didn’t go because of security reasons. It was quite a pity. It was the first time that I was going to meet my Chinese fans.

Q: Exactly how many people were gathered there?
I don’t know. I wasn’t able to step out of the hotel even once.

Q: Recently, you’ve been filming the movie “Fabricated City” right?
I really thought a lot about it. It was the first time I was going to be the lead in a movie, so I wondered what kind of project I should do. I was won over when I met the director personally, because of his tempting.

Q: It’s Director Park Kwang Hyun who directed “Welcome to Dongmakgol” right?
Yes. That movie was also rather peculiar. I was attracted by his own style. If I were to work with this director, it will be very unusual and interesting.

Q: Because you’ve been busy filming the movie, you’ve only rested for one day within a month. You ended up spending that day doing this interview right?
There’s quite a lot of filming in the provinces. There are times where I spend the whole week in the province. The movie is the most important thing to me now so I’m not complaining.

Q: Besides that, when will you be having a meeting about your Chinese drama?
We communicate through emails (laughs).  Some times they also come over personally.

Q: It’ll be good if you also get to perform a musical in China just like Japan.
Ah, that will be interesting!

Q: A Hallyu star that stands on the musical stage. That seems to be the unique charm of Ji Chang Wook that sets you apart from other Hallyu actors.
I also think that way to a certain extent (laughs). When I was younger, I didn’t have a colour of my own at all. I thought of myself as very ordinary. But I think this in itself is my own colour.

A “Seoul City Book” was also included with this issue of Grazia, where he is seen posing with model Han Hye Jin. 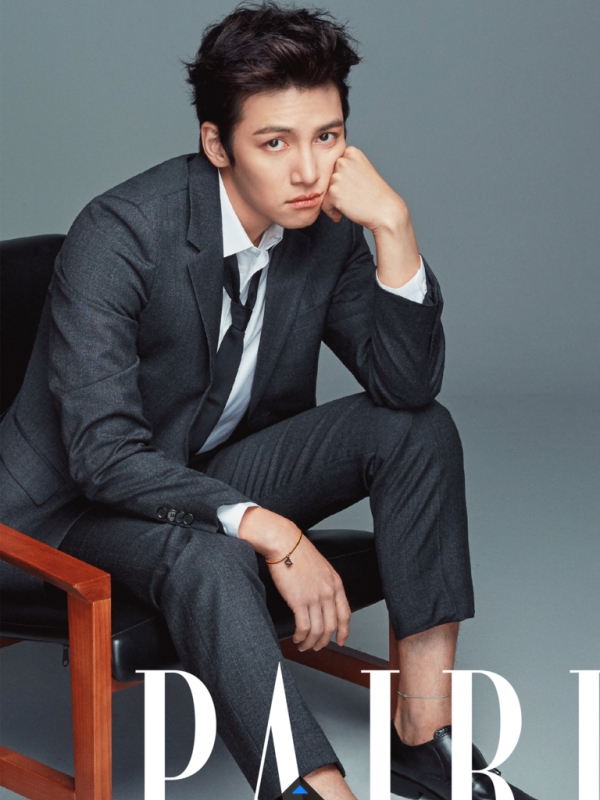 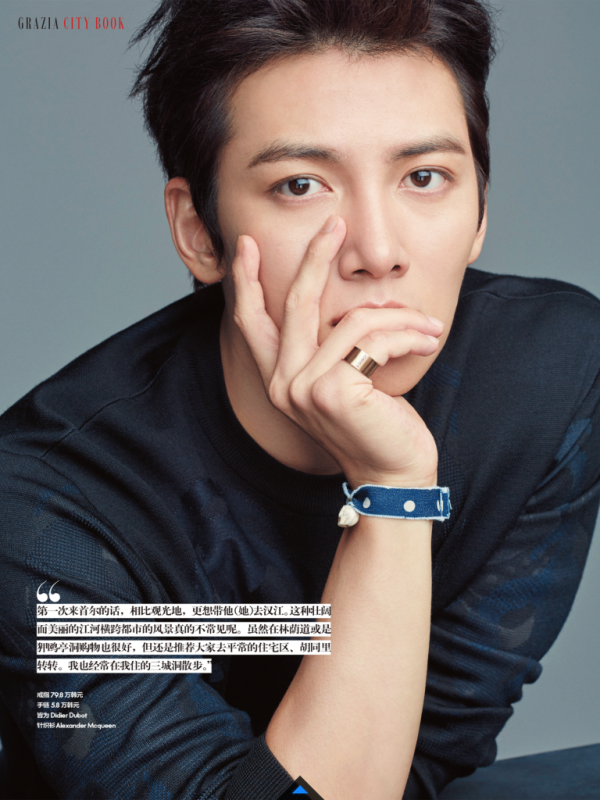