25 November update:  Due to “unforeseen circumstances,” the 9 January 2016 concert has been postponed.  Refunds will be available at the point of purchase.

Musical “The Days” will be returning next year with a concert that will reunite all the cast members of the successful musical, and Ji Chang Wook might be attending it too.

The musical was originally created based on classics by the late singer Kim Gwang Seok. This concert will be unlike a proper musical that involves dialogue and a story, and the cast will only be singing the classics that were featured in the musical. For foreign fans who are unable to understand the musical due to the lack of subtitles in the show, a concert might sound like a better deal!

Organised by Insight Entertainment, this will be Korea’s first musical concert, and it will feature 22 cast members and a 30-member live orchestra. 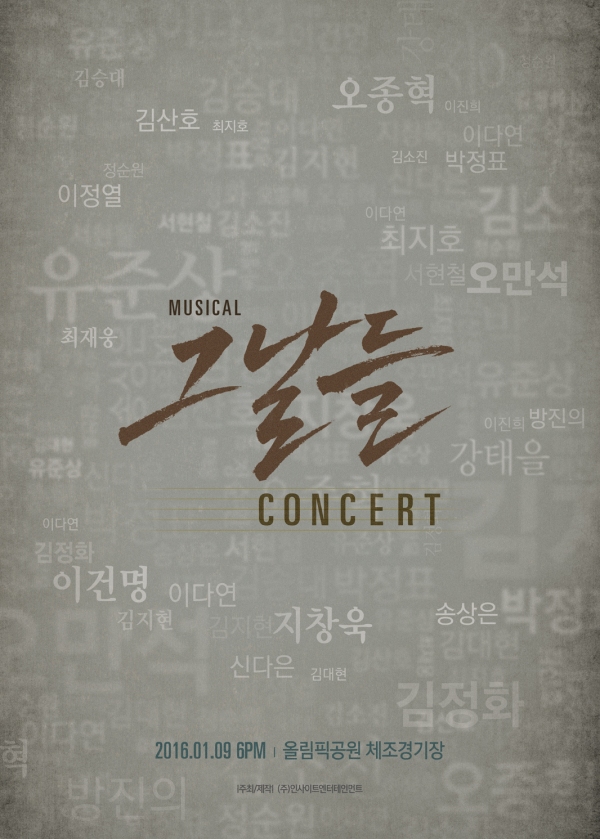 Disclaimer: At the time of writing, there has been no confirmation from Glorious Entertainment as to whether Ji Chang Wook will be performing at the concert. And given how silent they have been, goodness knows when they will say anything about this. But Ji Chang Wook’s name is mentioned in the cast list on the websites of Insight Entertainment and Interpark Ticketing, so unless there has been a mistake on the part of the organisers, we take this to mean that he will be attending. Due to the risk of changes, please exercise due diligence and decide wisely if you intend to go for the concert.

One thought on “[Event] Musical “The Days” to hold concert”