Ji Chang Wook is back on the road again, and Japan is the lucky recipient this time around!  Wook will be holding another music concert in Osaka on 17 April 2016, with the details as follows: 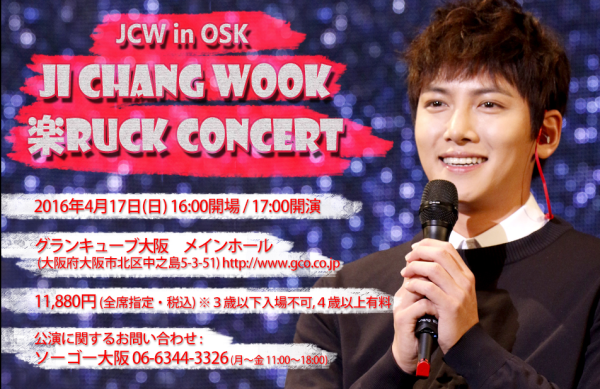 Admission:  11,880 yen (general admission, inclusive of taxes and service charges) ※ not open to children under 3 years of age; children 4 years and older will be charged full admission price ※

The Osaka International Convention Centre is a different venue from his last fan meeting there in June 2014.  The Centre has played host to other Hallyu stars in the past, along with being the premiere convention centre for the Kansai Region.  The Main Hall where the concert will be held has a capacity of approximately 4,500 seats.

The closest train station to the Centre is the Nakanoshima Keihan Line station (use Exit No. 2 from the platform), with the next closest being the Fukushima JR Loop Line station (a 15-minute walk to the venue).  Several city buses run directly from the JR Osaka train station as well.

This event was just announced today, so stay tuned for more news as it happens!