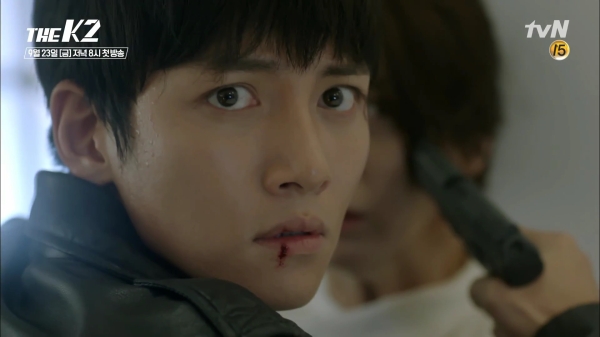 Heart-stopping action, hot bods and emotional acting abound in new teaser videos for “The K2”. And the drama hasn’t even started!

tvN is going all out to bombard us with an endless stream of teasers and stills for “The K2”, and we are barely keeping up amid our real life commitments. So apologies if you find us updating several hours late. Four new teasers have been revealed within a short span of less than 24 hours! Promotions, tvN does it right.

First off, we see our female lead Go Anna (YoonA) speaking to Kim Jae Ha (Ji Chang Wook), “Don’t die, this is an order”. He hangs up without saying a word and drives off like a boss.

In the second teaser, we have Choi Yoo Jin (Song Yoon Ah) commanding him over the phone, “Do not move without any orders from me”.  He hangs up without saying a word, puts on his suit and checks his gun.

Looking visibly tired and annoyed with all these women bossing him around (just kidding), he  changes his clothes, checks his gun and drives off without a word in this third teaser.

In the final teaser, we finally have something different. As he points his gun at Yoo Jin, Anna screams at him, “Shoot! SHOOT! NOW!”. He thinks to himself (in reference to Yoo Jin), “Seems there’s another person who wants you dead”.

Now, that was intense. Hopefully the actual drama will be just as good.

I’m really working hard to prepare right now. I’ll do my best to meet all of you with a good piece of work. Please show lots of anticipation for it. This will probably be a drama with a new feeling that is both unique and has not been seen before. I hope you will love my new drama a lot. Thank you.

tvN Friday-Saturday drama “The K2” will premiere on 23 September, Friday at 8pm.