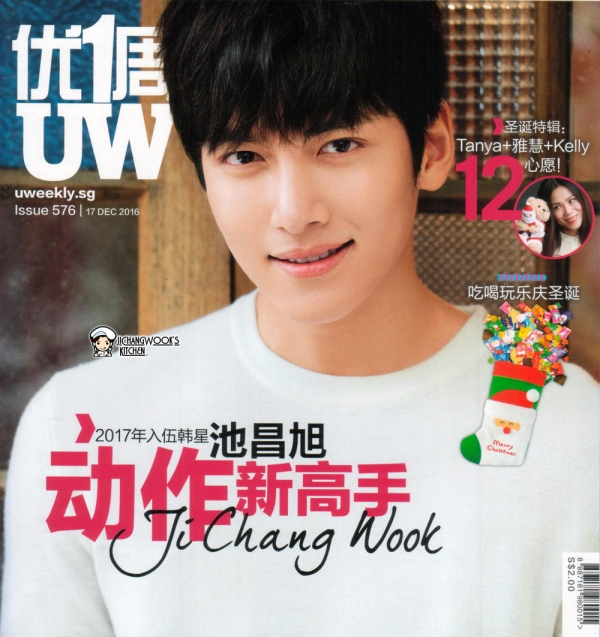 Ji Chang Wook (29), who is about to enlist in the army next year, has been dubbed an “expert action star” by the Korean media after starring in the drama “The K2”. Most Korean A-list actors reportedly prefer to star in short romance comedies that are around 20 episodes long, because they find action films too tiring and long-running dramas take too long to film. But Ji Chang Wook is not like that.

Five years ago, Ji Chang Wook shot to fame in the 159-episode daily drama “Smile Donghae”, and his performance in every show has left a deep impression on audiences. Maybe because he has prior experience in a daily drama, Ji Chang Wook has an especially large number of older female fans.

This is our second time interviewing Ji Chang Wook. In the interview this time around, we found Ji Chang Wook to be more steady and matured than other young male actors. We are really looking forward to his outstanding performance in his next piece of work!

Q: “The K2” has ended its run. Please share how you feel about filming this drama.
Now that filming is completed, I feel very happy and I can’t bear to leave it. What I will miss most is not being able to see the actors and staff whom I worked with.

Q: We heard that your pay for starring in “The K2” was the highest in the history of tvN, is this true?
Yes. I felt immense pressure when I learnt that I received the highest pay. Whenever I feel very tired during filming, I will think of the “high salary” and I just have to push myself on and work even harder. Haha.

Q: So are you satisfied with your performance in “The K2”?
Hmm, I don’t know how I should say this. If we look from the perspective of viewership ratings, I can’t say that it met my original expectations. But I heard from my manager about stuff like how the broadcasting rights was sold overseas and we didn’t make a financial loss, so he told me that I can be at ease. Haha.

Q: You had a lot of intimate scenes with YoonA in “The K2” (e.g. kissing, CPR), this is probably the first time that both of you are working together, so how did you all develop the rapport? Will you feel embarrassed during the intimate scenes?
Not only was this our first time working together, the first scene that we filmed together was a kissing scene shot in Spain. We were not familiar with each other, and yet we had to film a kissing scene, so it was a really big burden. So when I was filming in Barcelona, I took the initiative to chat with her and drink coffee, and I even told her “YoonA, let’s quickly become good friends”. After that, when we were done filming the kissing scene, there was no awkwardness anymore.

Q: You suffered a lot for the sake of filming “The K2”. There were many action scenes in the drama, and you also mentioned at the press conference that this will be your last action show. So which genre do you prefer? Why?
I think I’ve already done my best in “The K2”, so I can rest a bit from now on. But several people have asked me recently, “What if you receive a really awesome script for an action show, will you act in one again?” This question left me very vexed. If there is a very good piece of work in the future, I will probably give it a try. Because every time I act in an action show, I will think, “Why must I suffer so much to act?”, but once filming begins, I will forget about all these and fully immerse myself in the project, which makes me very excited. Action can be considered a dream for men, and acting in action shows make me feel excited, and all I can think of is to do a good job in every scene.

Q: You often flaunt your good figure in your shows, even in “The K2” (e.g. stripping in front of the camera, nude fight in the sauna). Actually a lot of Korea drama feature male actors going topless, perhaps to stimulate the viewership ratings. What are your thoughts about male actors having to strip to attract viewers’ attention?
I did strip in the drama, but why wasn’t it stimulating enough to raise the viewership ratings of “The K2”? Haha! After the broadcast, the nude scene did become a hot topic on the internet. When I first saw the script, I was very worried that audiences would find the “nude sauna fight” very dirty. But after watching it, the final footage turned out better than what I expected, and the audiences’ reaction was also not bad.

Q: Which scene in the drama left the deepest impression on you?
That would be the nude fighting scene filmed in the sauna. We spent a total of eight hours filming this scene, and this was even shot on the first day that we started filming for “The K2”, so it definitely left a deep impression. Back then, I specially requested the director to let me film this nude fighting scene first. Because I was worried that the longer I film, and if I have to stay up overnight occasionally and snack, it would be harder for me to maintain a good figure. Eventually, the director really made me film this on the first day.

Q: How do you maintain your figure? What is the most difficult part of it?
If I have to film a nude scene, it’s just like preparing for an exam, I will start dieting a few days before, and exercise desperately. I normally enjoy exercising too, so this is not too difficult.

Q: You are now 30, do you have a different attitude towards work?
Now that I’m 30, there’s nothing different acting-wise, but from the perspective of a normal guy, I do feel different. When we were young, we probably would have thought, “What will I be doing when I’m 30?” Being 30 still feels special, many people even say that men only start growing at the age of 30. My decision to star in “The K2” probably had to do with me turning 30, because I wanted to show a more matured and manly image.

Q: You appeared in “We Got Married” to show support for your good friend Choi Tae Joon. Have you ever thought of joining the show proper and experience a make-believe romance?
I think my personality is not very suitable for variety shows. If one wants to be on a variety show, you need to be eloquent and present your natural self. Because I can’t speak that well, under situations where there is no script, I wouldn’t know what to do, so I will not consider appearing on such variety shows. Actually, the production team of the MBC variety programme “I Live Alone” recently invited me to appear on the show, but it’s too bad that I currently live with my mother, so there’s no chance even if I wanted to do it. Haha!

Q: Do you have a girlfriend now? The type of girl that you like is…?
I’ve always wanted to date, but I don’t have a girlfriend now. Whenever I find a girl whom I take a liking to, it never works out when I get busy with work. This kind of situation keeps repeating itself, so eventually, it is very hard to date.

If I have a girlfriend or intimate scenes in a drama, it seems I can get second-hand satisfaction through acting.

I like women who can get along well with me. For instance, it’s not difficult to find a girl who is tall and beautiful with double eyelids, but finding a girl whom you can easily get along with is not as easy. So I hope to find such a woman.

Q: Beside South Korea, you also starred in a few Chinese dramas such as “Whirlwind Girl Season 2” and “Whirlwind Girl Season 3” (*Note: The reporter seems to have made a mistake here. There have been no reports of him starring in a third season). Please share with us the differences in filming in both countries, and the sufferings or happiness you’ve experienced.
China uses the system of “film first and air later”, so their filming period is not so rushed like how it is in South Korea, the cast also has ample time to communicate with the director and scriptwriter and understand their creative intentions.

Conversely, the filming period is South Korea is very rushed, and the filming efficiency of the production team is extremely high, which is an advantage. Last time, I often saw movies and dramas that were joint collaborations between China and Korea, or dramas co-produced by Japan and Korea. I think all these stemmed from the idea of both sides trying to complement their strengths and weaknesses.

Q: Are you preparing to enlist in the army soon?
I will probably receive the notice for enlistment in late February or early March next year, and I’ll probably be able to confirm my dates of enlistment by then.

But I do wish to accept a new project before I enter the army. I’ve already received a few scripts so far, and I will make a decision after I’ve evaluated them closely.

I’m too tired now, so I don’t have any intentions of acting in an action show for now. I want to try acting in a romantic comedy.

Q: It has been quite some time since you last came to Singapore, is there a chance of you coming to see your fans in Singapore again? Is there anything about Singapore that you miss?
It has been about a year. I certainly wish to go to Singapore to see my fans, and my agency is currently working out my schedule to hold fan meetings overseas, but I do not know of the details yet.

Translated from Chinese to English by Gabby. Scans by Gabby.

PLEASE DO NOT REPRINT, REPURPOSE, SCREENCAP OR OTHERWISE COPY OUR CONTENT WITHOUT WRITTEN PERMISSION.