Around the end of November 2012, the W-Foundation (Wisdom for Future Foundation) of South Korea, a non-profit charitable organization (in conjunction with the National Geographic Channel) was tasked with spreading awareness about the urgency of protecting the environment in order to take action by ‘going green’ in our daily lives and to make the Earth safer for our children’s future.  As part of the W-Foundation’s ideas to raise awareness of such was the gathering together of several Korean actors (including our very own Ji Chang Wook), singers and sports figures in a chorus to perform in a music video entitled “Beautiful World.”

Fast forward a little over 4 years, and more than 100 stars will be participating in the W-Foundation’s “Hooxi Global Nature Conservation Fund Raising Campaign” telethon, which will be staged at the Seoul Myeongdong Arts Theater, beginning at 4:00pm on 22 December 2016 and continuing its broadcast for 72 straight hours.  (Note: We have no information yet if Ji Chang Wook will be appearing at this telethon, and will update this post as more information is known.)

In conjunction with the upcoming telethon, W-Foundation has released a CD compilation entitled “Hooxi, the Beginning” with two other songs previously written and performed on behalf of the Foundation.  This digital CD is to be released on 22 December 2016 through the usual Korea and Japan music portals at varying  costs (depending on your purchase portal of choice), with all proceeds going towards the Foundation’s International Climate Refugee Relief Fund. 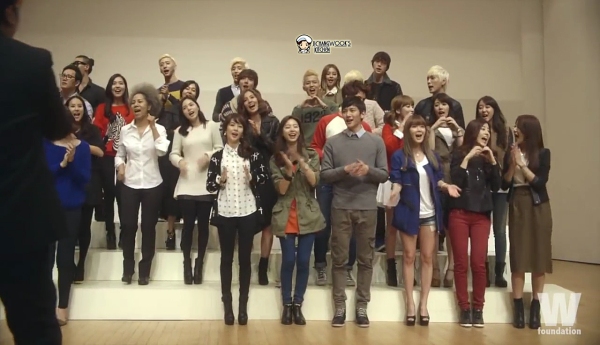 Thanks to the W-Foundation of South Korea and the National Geographic Channel for the use of their video.