Good news to the rest of the world!  “Fabricated City” ticket sales have overwhelmed the Korea box office since its release date on 9 February, with over 1 million ticket admissions in 4 days, becoming the fastest movie to cross the 1 million mark in 2017.  Woo hoo!!!  And due to its success, “Fabricated City” is scheduled to be exported to 12 different countries through the efforts of the European Film Market (EFM).  These countries include Taiwan, India, Macao, Italy, Vietnam, Australia, New Zealand, the Philippines, Indonesia, (previously announced) North America, and others to be scheduled at a later date.  Congratulations to the cast and crew!!! 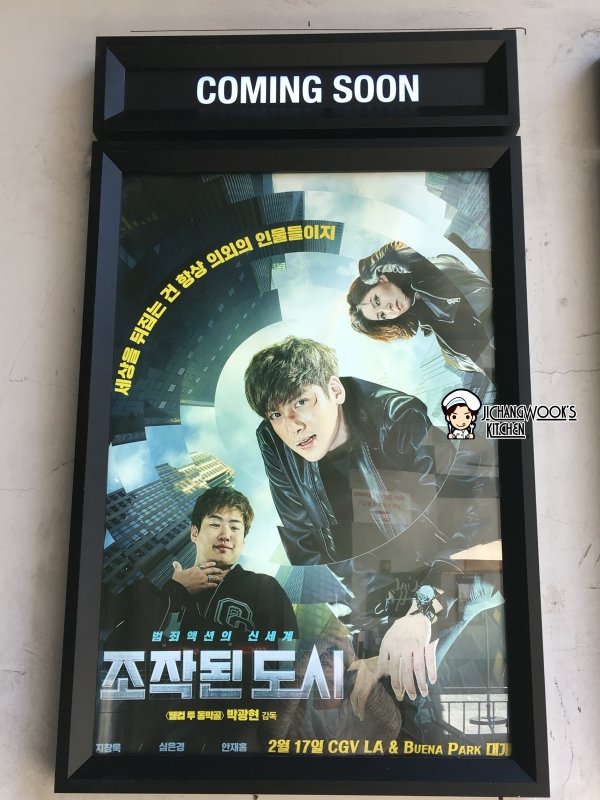 And speaking of North America, I was in Los Angeles this past weekend and made it a point to stop by the CGV Madang (Koreatown) theatres to find out more information regarding Ji Chang Wook’s upcoming “Fabricated City” premiere this Friday, 17 February.

There are two large-screen monitors in the lobby playing the long-form previews on a continuous loop, so that’s a good sign.  As plans are still be worked out at present, the management was not sure if two screens will be scheduled for the weekend premiere (as has been scheduled for prior premieres), but ticket sales should begin on Wednesday, 15 February at approximately 10:00am Pacific time (showing times TBD; keep checking the link):

Tickets will available for purchase at the box office as well, but purchasing online beforehand guarantees that you have a seat in case of a sellout.  Prices range from $9.00 (morning shows; members only) to $13.50 (matinee and evening shows).  I highly suggest signing up for a CGV Membership as that gives you a $1.00 discount on tickets plus other movie goodies.  You can do that either online or at the box office prior to purchasing your seats.

As “The King” is still showing at the CGV Madang, their banner is prominently featured on the balcony outside the theatre entrance.  Hopefully we’ll see a “Fabricated City” banner hanging there for the premiere!  Unfortunately, management knew of no plans for any of the stars to attend this premiere (especially Ji Chang Wook, as he will be performing on 17 February in Tokyo).

I plan on attending as many shows as humanely possible throughout FabCity’s first weekend from Friday, 17 February through mid-morning Monday, 20 February.  I’ll probably be hanging out at the lobby’s Ciné Cafe in between showtimes, so come by and say hello.  Also, if anyone is interested in having a get-together on Saturday or Sunday at the Caffé Bene next door to the CGV, let me know in the comments and I’ll see what can be arranged.

Fingers crossed for a great turnout.  Seeyas there!

NOTE:  We do not have all confirmed information as to when “Fabricated City” will be scheduled in “your country” other than the ones listed below and for North America, since we do not have the ability to track the movie’s global premiere schedules.  It may be weeks or it may be months before FabCity arrives in your town, so please consult your local theatres for more details.

17 February update:
According to CJ Entertainment, “Fabricated City” received strong interest from overseas buyers at the Europe Film Market convention that was held during the 67th Berlin International Film Festival. The movie has been sold to 26 different countries. “Fabricated City” will be screened in a total of 31 countries when you include those countries where CJ is distributing the film themselves.