Ji Chang Wook appeared last night (28 July) on the Naver VMovie Channel for possibly the last time before his impending enlistment on 14 August, and chatted for approximately 90 minutes about tons of things.  Let’s recap the highlights!

Ji Chang Wook began the show saying, “I tried saying my greetings like a professional MC. It’s very nice to meet you.”  He spoke about what he has been doing recently, “‘I’ve been busy ever since ‘Suspicious Partner’ ended. I’ve been completing schedules, interviews, CF shoots, met up with friends and also had a meal with my mum that was long overdue. I held a concert and had an enjoyable time with fans. I had my final CF shoot today before coming here to meet everyone on V Live.”

Ji Chang Wook said, “It’s Friday today but many of you don’t seem to have plans. I’m thankful that all of you are watching me on a Friday night.  This is my final broadcast before my enlistment. It’s a pity and I’m also filled with mixed emotions. Each time I chat with everyone this way, I always feel it’s a pity but also excited; I will have fun doing this broadcast”.

Regarding the title of his V Live broadcast, he said “I deliberated over the title of my final broadcast but I eventually decided on making a proposal to everyone.  To express my wish for everyone to wait for me till the time I get discharged in 2019, I decided to go with the title ‘Goodbye Proposal’.  You will accept my proposal right? I hope you all will accept it well, so let’s begin with the ‘Goodbye Proposal’ now.  I shall address the things that you all are curious about and any requests you make.”

Ji Chang Wook opened his “Goodbye Proposal” broadcast by saying, “I will listen to your requests, I will answer all the questions, and I will sing.”  In addition, he requested viewers to “I want you to change your nickname to your own name,” in order to call the fans one by one by their real names.  But he added, “There are three things I cannot do for you,” and cited revealing his abs, choosing his memorable roles, and not going to the army as the three things.  “I have no abdominal muscles. People tell me to take care of my face while I am defending the country, but I won’t listen to that carefully. The country must be protected,” he said with a laugh. 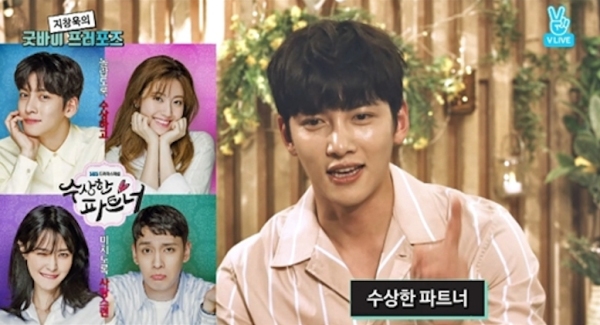 The talk turned to Ji Chang Wook choosing his Top 3 favourite career works.  Selecting as his Number 1 favourite was his recently-completed “Suspicious Partner,” because it was his most recent work and his first romantic comedy.  “It was a sweet show that made me want to fall in love and date… for those who have already watched it, I hope you will watch the drama when you miss me while I’m in the army.”

Second on his favourites list was MBC’s “Empress Ki.” “I had fun filming it but 50 episodes was long. From his child-like self to his crazy self, you can feel the diversity of the character Ta Hwan.”

Lastly, his third favourite was KBS2’s “Healer.”  Wook said, “I have received so much love with this work. (The character) appeared very handsomely from the beginning to the end thanks to how the writer wrote.”

When asked about his plans to shave his head (for the army), he asked for opinions, and he also answered other questions about the cologne he uses these days, movies he has seen recently, and facial skin care tips, etc.

When asked what he thinks he would be doing in 10 years, Wook answered, “I can’t imagine what I will look like 10 years later.  I am more curious about what I will be doing two weeks later.”

As to his favourite movies, Wook said that he’s fond of the American actor Jim Carrey and his film “Eternal Sunshine (Of The Spotless Mind), Edward Norton and Brad Pitt’s decadent masculinity in the movie “Fight Club,” the alien movie “District 9,” and also recommended his first starring film “Fabricated City.”   His favourite comic books are “Naruto” and “Piano no mori” (Piano Forest), and favourite foods (amongst many) are sweet-and-sour pork with the sauce poured on, and bibim-naengmyeon (cold spicy noodles).

He chose a positive mind, friends and family as the three things that heal him. “I think positively when I get more and more tired.  I tell myself ‘Everything will be fine’, ‘Don’t worry,’ ‘Difficulty is one way to make you mature’.  I think I will become a healthy adult if I overcome it.” He added, “I am very thankful to my friends who side with me and spend time with me when I am having a hard time.”  He described his family as people who “will always be there for me” and wished for them to be happy always. 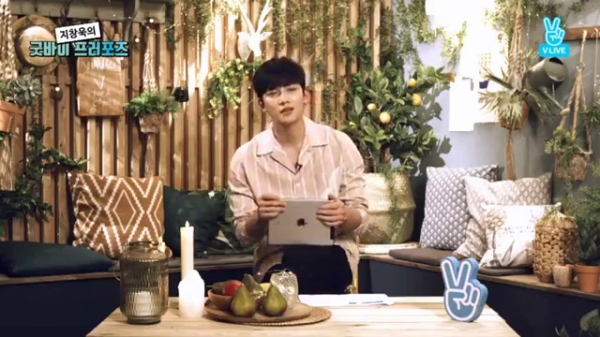 He also revealed a playlist of his favourite songs. He recommended Paul Kim’s “Rain”, saying “I don’t know him personally. The song is very good”; Jung Joon Il’s “Confession”, which he performed at his recent concert and described as a song that he frequently sings at karaoke sessions. Referring to Bolbbalgan4’s “Freesia”, he described it as a “very refreshing song that he really loved at one time.” He also recommended Kim Gwang Seok’s “A Lonely Night” from his musical “The Days”.

Wook also revealed his deep affection for the musicial “The Days”. He said, “‘I did ‘The Days’ for 3 years. It is a piece of work I really love. Will I star in ‘The Days’ again after I get discharged? Is it right for me to do it again? I am still thinking hard about this. Honestly, I have no plans for ‘The Days’ yet.”

He also dished out funny advice such as “Please don’t think of me 24 hours, take it easy,” and “You are in your 3rd year of high school so please don’t watch this, don’t come to my concert, but go study instead.” He addressed the many concerns of his fans from getting a job to marriage and dieting and also gave encouragement. He didn’t forget to greet his fans from various countries such as Vietnam and India.

He chose the Rose of Sharon (national flower of Korea) as a flower that resembles him “because I am going to the army soon”. When an elementary schooler referred to him as “Ahjusshi”, he said with a smile, “I’m not an ahjusshi, I’m a cute kiddo.” When asked about when he is cutting his hair, he gave a dark expression and said, “I’m still thinking about it.” 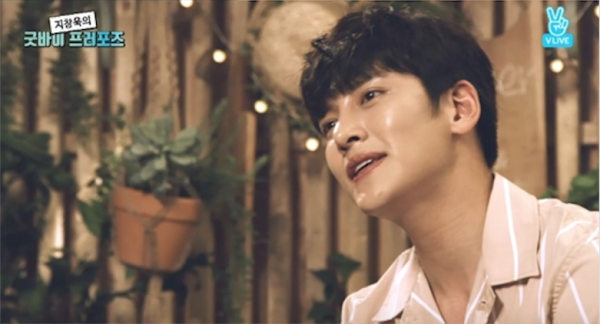 Towards the end of the broadcast, he gave a live performance of “101 Reasons Why I Like You” from the “Suspicious Partner” OST, which he described as a “sweet song that is easy to sing along and easy on the ears.”

As a final gift for fans, he assumed the role of a “handphone boyfriend” and wrote lines such as “Honey, don’t cheat on me”and “Oppa is leaving soon” on a whiteboard which he held up for viewers to take screenshots of.

Ji Chang Wook said at his closing speech, “It is not that long. I will be barely 33 years old when I come back from the army. It is a very short time. I think everyone will wait well for me. It has been a happy time. I am very thankful.  I will stay healthy and be brave in the army during the 1 year and 9 months. Everyone, please stay healthy and wait for me.”

In case you missed the original broadcast, the replay link is here and should be put online again soon.  Keep checking back!  Ji Chang Wook’s ‘Goodbye Proposal’ VLive

Translated by Ji Chang Wook’s Kitchen. PLEASE DO NOT REPRINT, REPURPOSE, SCREENCAP OR OTHERWISE COPY OUR CONTENT WITHOUT WRITTEN PERMISSION. These videos were uploaded for the sole purpose of providing English subtitles to international fans. No copyright infringement intended.