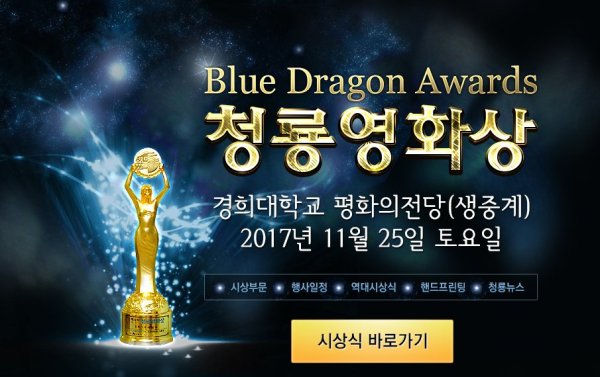 And the Awards Season continues!  The 38th Annual Blue Dragon Film Awards will be held on 25 November 2017, and both “Fabricated City” and Ji Chang Wook have received nominations!

For those of you not familiar with the Blue Dragon Film Awards, this is one of the preeminent award ceremonies focusing exclusively on the Korean movie industry (the Daejong Film Awards/Grand Bell Awards being the other event).  The Blue Dragons have been awarded annually from 1963 through 1973, then resurrected again in 1990 and continuing through the present.  As in years past, the movie-going public has the opportunity to vote in their favourite categories.  These votes are then added to the Judges’ Panel votes, with the top vote-getters being able to take home that nice little statuette.

To that end, “Fabricated City” is amongst one of the 120+ films nominated in several major categories (Best Film and Best Director being a mere sampling), and Ji Chang Wook himself is amongst the nominees for Best Actor, Best New Actor, and Male Popular Star.  Online voting opened on 12 October and runs until 11:59pm on Sunday, 29 October.  The process to sign up to vote for the Blue Dragons is quite fiddly, though.  We hope the tutorial below will help you through it, and we highly suggest going through the process on a laptop/desktop or other screen larger than a mobile phone since there are many steps involved.  Unfortunately, after going through all these steps (and to deter certain fandoms *ahem* from stuffing the ballot boxes), you can only vote once per ID/nickname.  *flips table*

So if that does not scare you away you right off the bat, let’s get started!  First, access the Blue Dragon Film Awards site here:  http://www.blueaward.co.kr/awards/.  When the screen pops up, click the white box to create an account: 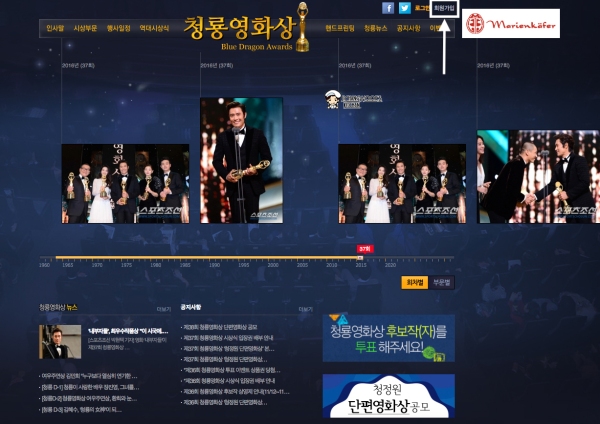 A new screen that says “step.02” will open where the Rules and Regulations reside.  (Fortunately, these need no translation as it does not have anything to do with setting up your account.):

Scroll all the way down to the bottom and click the button next to the “I Accept” text.  Next, click the brown bar to ensure you have accepted the Rules and Regulations:

That will then take you to the page where you will enter in your personal information: 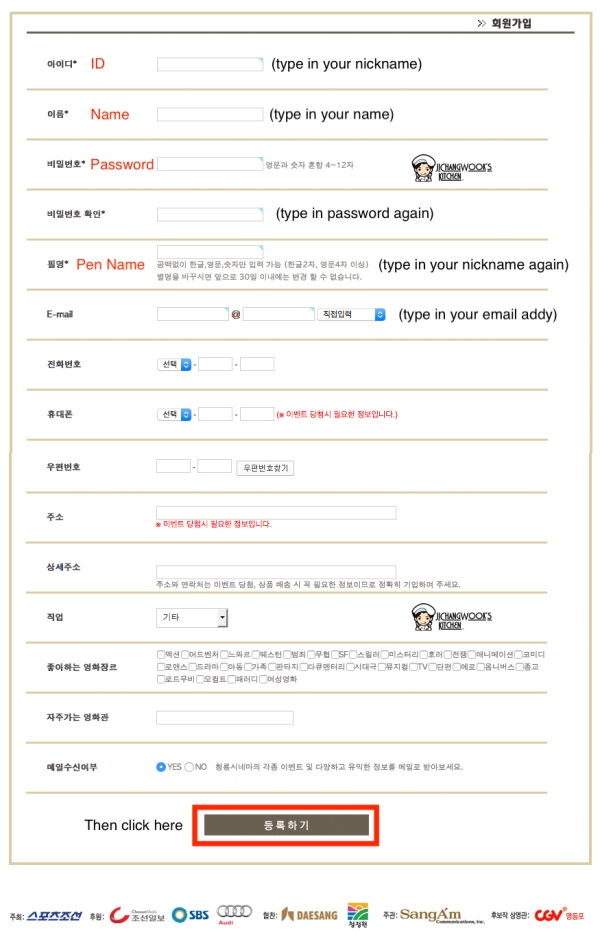 The steps above are pretty self-explanatory; the only boxes you must fill in are the ones noted by the “*” above, along with providing an email address (to prove that you are not a random bot).  Skip everything else since they are not applicable for international fans.  When you have filled out those items, click the box at the bottom.  If everything goes smoothly, you will get a dialogue box that says: 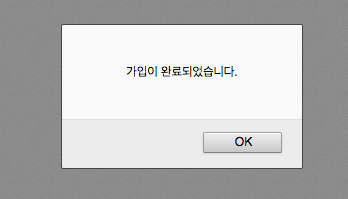 Hit OK, and you will be redirected to the main Blue Dragon Awards introductory page.  Click on the yellow box to be taken back to the Main Page: 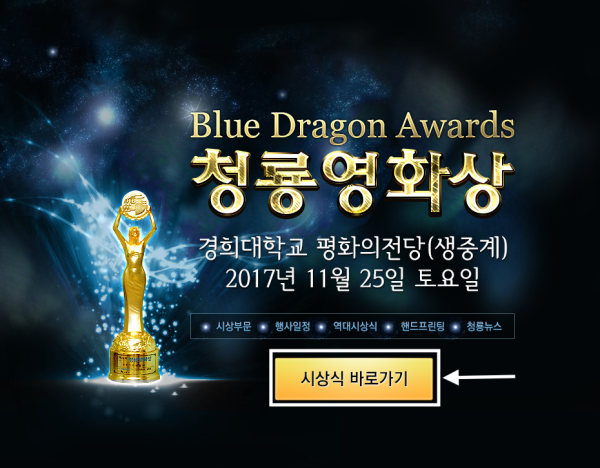 Then click on the box at the top of the page to officially sign in to vote: 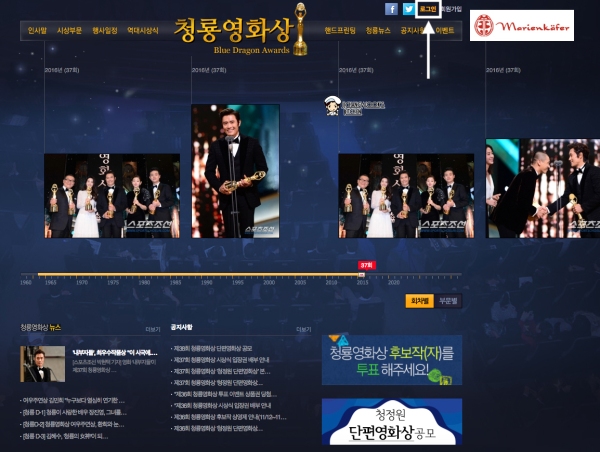 Yet another box will pop up for you to log in to the voting area.  Fill it out as indicated below, and check the large box to log in: 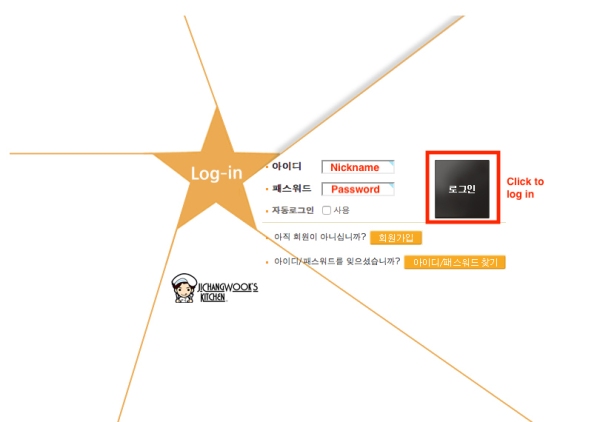 That will take you to the another page to access the main voting page.  Hit the blue box to take you there:

Now here is where it starts getting difficult.  First, you need to recognise the proper Hangul characters in order to fill in the blanks:

Utilise the pulldowns in each category to match the Hangul with the characters written above.  (For Director Park, there will only be one available choice once you choose Fabricated City in its specific pulldown.)

The pulldown for Fabricated City (for all the categories): 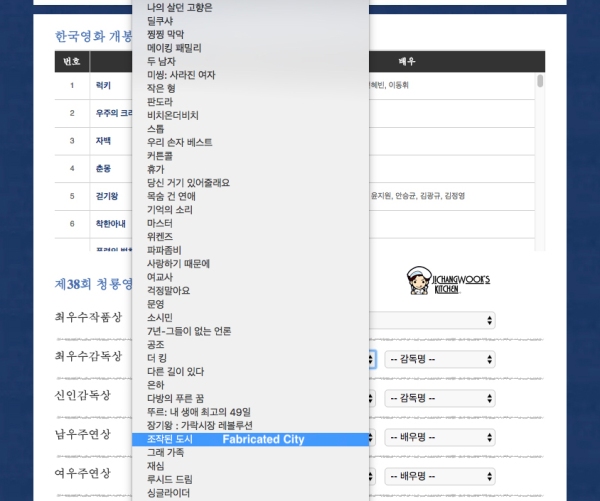 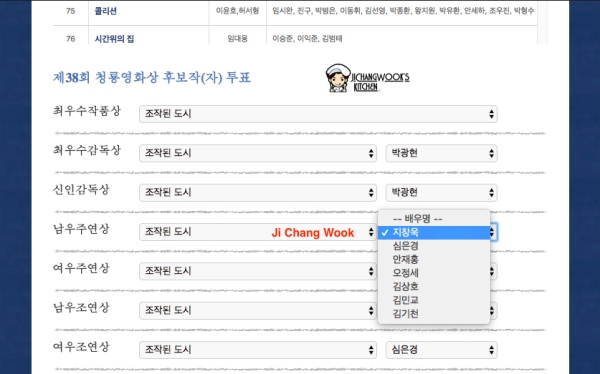 Your entries should look exactly like the screencap below, with the exception of 3 blank boxes that you will need to fill in by hand.  Cut and paste 특수효과 for the first empty box (the Technical Award for Special Effects), 지창욱 for the empty box at the bottom, and 심은경 for the second empty box at the bottom (both for Popular Star awards):

Give the screen one last check to ensure you’ve captured the correct nominees; the site will not let you proceed unless all entries have been populated.  Click the large blue box, and that should register your votes straightaway and take you back to the Main Page.

We realise this is quite a chore to get through.  But even though Ji Chang Wook is away serving his country, we can still make a concerted effort and let him know that he is not forgotten by voting for Wook and his “Fabricated City” cast and crew!

Remember that voting closes at 11:59pm on Sunday, 29 October, with the finalists announced on 2 November 2017.  Good luck and happy voting!

PLEASE DO NOT REPRINT, REPURPOSE, SCREENCAP, TRANSLATE INTO OTHER LANGUAGES, OR OTHERWISE COPY OUR CONTENT WITHOUT WRITTEN PERMISSION.