Resuming our trip down Memory Lane, we present an interview and small photoshoot that Ji Chang Wook gave to Korean women’s magazine Lady Kyunghyang in November 2010, shortly after landing the lead role in “Smile Donghae.”  Enjoy!

Big pressure thinking if I can do well
Q: How long has it been since your debut?
A: I debuted in 2008 so it has been 3 years.

Q: Woah, you got to play the leading role in a daily drama in 3 years after your debut?
A: Hahaha. You can say that I got lucky. I often heard that I was lucky even when I got casted for “Sons of Sol Pharmacy”. Actually, I personally auditioned for “Sons of Sol Pharmacy”. This time, I think the director thought well of me so he casted me for this show.

Q: It’s not easy to let a rookie take on the lead role of a daily drama though?
A: The director must have been uneasy at first too. As expected, I felt uneasy as to whether I will be able to do a good job.

Q: What were you most uneasy about?
A: I think I still haven’t fully adjusted to a daily drama. I was impatient initially, but I think I’ve gotten a lot better now thanks to the help of my seniors and noonas who are working with me.

Q: You must have been extremely happy when you got casted as the lead, how was it?
A: Compared to being happy, I was more pressured as to whether I will be able to lead the show well. But while relying on the fellow actors and seniors who are working with me, I came to realise that I am not alone. Thanks to that, I ended up having greater trust in my colleagues and seniors.

Q: Among the people beside you now, who gives you the most strength?
A: Do Ji Won noona~! I used to call her “sunbae (senior)” at first, but because I will speak to her informally in the show like “Mum, what are you doing?” so she said she hopes that we can speak informally on normal days too.

Q: You and Park Jung Ah sshi appear as lovers in the drama, how was it like acting together?
A: It was very difficult for me because I’m shy. It was probably difficult for Jung Ah noona too? (Laughs)

Q: It has been a long time since Park Jung Ah sshi debuted so she must have taken good care of you, how was it?
A: The three noonas Do Ji Won, Park Jung Ah and Oh Ji Eun all spent a lot of time with me so they took care of me like a little brother.

Q: Are you receiving acting advice also?
A: Do Ji Won noona has been good at giving me directions in acting. Noona has a very bright and soft personality so she has treated me well.

Q: If you were to describe your character in the show in greater detail?
A: Donghae was born and raised in the USA. He’s a short track national athlete. He has had a hard life because of his unwed mother who has a mental capacity of a nine-year-old. He is very protective over his mother. He has wounds, and loves his mother very much. He comes to South Korea to marry his girlfriend but various things happen and he works his way through these problems.

Q: Were there any problems while preparing for acting?
A: My casting for the role of Donghae was only confirmed 10 days before filming commenced. There was barely any time to prepare. Besides that, I also had to learn short track speed skating. Fortunately, I practised hard so I’m now able to skate with a proper form. But the thing that still burdens me now is English. It’s not possible for me to master the pronunciation of a native speaker within a day or two so I feel very pressured (laughs).

If a homosexual kiss scene is also acting, it’s OK!
Q: Just one drama alone is already a lot to keep you busy, but you are also acting in the musical “Thrill Me”?
A: Ah~ I’ve been doing the musical since the beginning of the year.

Q: I heard that the musical is popular?
A: The musical is always sold out. It was first staged in early 2007, and I heard that it has had a lot of fans since then. The fans don’t just watch it once, I’ve heard that there are many fans who watch several times. They remember the lines and sing along to the songs so I was surprised at first.

Q: I heard that this musical has elements of homosexuality?
A: Yes, there is a “kiss scene” between both male leads right at the start of the musical. I was very scared initially, and I wondered “Do I really have to do the kiss scene?” But after doing it, I found it to be all right. It is a necessary scene so it would be stranger if we didn’t do it.

Q: Do you have any aversion towards homosexuality in reality?
A: Actually I do, but there are a lot more homosexuals than I thought. And aren’t there more female audiences because the musical has a homosexual theme (laughs)? 98% of the audience are females, while 2% are males. Moreover, this is a story about the relationship between two males, so I think there are aspects of it that are very polished and attractive.

Q: Musicals are very different from daily dramas. Your approach in handling them are also different?
A: The preparation process for musicals is long, and I think the character becomes more complete as the performance is repeated. I can also feel a sense of thrill when I look at the audience’s immediate reaction from the stage.  There’s also the appeal of building a rapport with the audience. 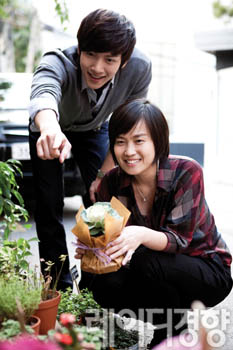 Q: Then what about dramas?
A: Firstly, the preparation time for dramas is short. So it’s still hard so far. Because I need to catch on quickly after seeing the script and express it. Right now, I think I’m still at the stage of learning as I go about doing this.

Girlfriend? I’ve no time and heart for that!
Q: I’m curious about what made you begin acting?
A: It’s just, because it seemed interesting. When I had to decide on my major at the end of the second year of my high school, I suddenly thought that I wanted to do something interesting so I chose the film and theatre major.

Q: So you managed to find something interesting?
A: It was interesting~! Except that I took a light step when I first started, but I’m starting to feel the weight now as I come to learn more about acting (laughs).

Q: What do you think is the charm of acting?
A: It’s tough some times, and there are times where I feel at a loss about what to do. But I think it’s the “charm of acting” that gives me the yearning to continue acting. While doing mind control to tell myself that “I can do it”, I’m also building up my confidence.

Q: A lot of girls must’ve been interested in you because you are handsome?
A: I was a kid with a very quiet personality. I didn’t know how to look cool, and I had no interest in that at all. I was just an ordinary student who played basketball and soccer and went to the PC Bang (*internet gaming cafe) with friends. Surprisingly, I guess I had no interest in girls.

Q: Do you have a girlfriend now?
A: I have no time, and there’s no suitable girl either. If we were to meet now, we won’t be able to have a relationship anyway since I’m busy. I don’t have any thoughts of wanting to meet a girlfriend too. I still want to work harder on my job. There’s no room in my heart since I’m so preoccupied with acting.

Father in heaven…I always miss him
Q: Did your parents oppose when you wanted to become an actor?
A: They were very much against it. My father passed away when I was little so I fought a lot with my mother. Because I said that I wanted to major in film and theatre all of a sudden. How surprised she must have been. When I think of it now, I do feel apologetic and I’m thankful that my mother gave me her permission.

Q: How does your mother feel about this now?
A: My mother told me, “Do not get overly excited, keep your head down and work hard”.  But my mother is able to see the work that I do, so I thought she will like it. She watches my drama regularly.

Q: May I ask about your father?
A: He passed away because of cancer when I was in my fifth year of elementary school. I just miss him when I think of my father.

Q: Your father must be proud of you in heaven now.
A: He should like it if I work hard. I will sometimes pray to my father for help so that things go well. I think that is why I’m able to star in good dramas. I guess my father is helping me (laughs).

Q: What is your dream as an actor?
A: A real and charming actor. I hope to be a person with a distinct charm of my own. I want to broaden my range of acting through diverse characters in my shows. I hope my charm will be revealed as time passes. My dream is to become an actor who gives off the colour of the actor Ji Chang Wook.

Translated from Korean to English by Gabby.  PLEASE DO NOT REPRINT, REPURPOSE, SCREENCAP, TRANSLATE INTO OTHER LANGUAGES, OR OTHERWISE COPY OUR CONTENT WITHOUT WRITTEN PERMISSION.  This interview was translated for the sole purpose of providing English content to international fans.  No copyright infringement intended.