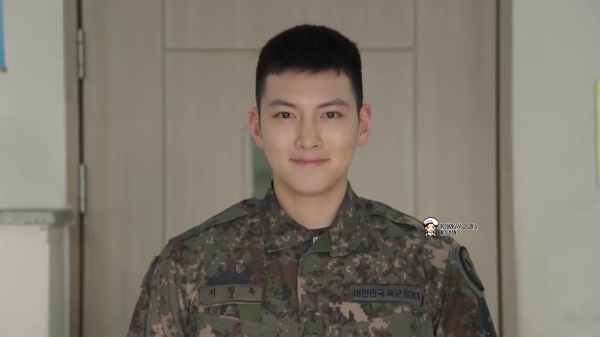 Since there are less than 10 days left, we were just debating about which project Ji Chang Wook should jump into after his military discharge on 27 April 2019.  This may have already been decided for us, as reports are circulating that a potential drama role is already being considered!

On 17 April, several news portals are reporting that Wook’s next project may possibly be a drama entitled “City of Stars” (literal title), an air-space drama that depicts events that take place after two men who longed for the sky since childhood are selected for the astronaut training program.  Wook is being considered for the lead role of Yoo Dong Ha, a former air force pilot who is now unable to fly after developing claustrophobia from a plane crash during his service days, and now works as a general aircraft mechanic.  Traveling to and from the base at Star City and a space center in Goheung, Dong-ha is faced with several conflicts while competing with his companions.  In order to go to space, Dong-ha must overcome his claustrophobia to realize his dreams.

The drama is reported to incorporate cinematic visuals and specialized depictions of aerospace technology.  PD-nim Jang Jin (known for the movies “We Are Brothers” and “Good Morning, President”) has been in discussions with this drama project since 2016, and tentative offers went out to actors Hyun Bin and Jang Dong Gun at that time.  Being turned down by those actors, the drama then sat on the shelf until being resurrected in late 2018, with actor Byun Yo Han in discussions to join the project.  Han recently turned down the Dong-ha role in March 2019, with no reason given at that time.

Of course, nothing has been set in stone yet and officially confirmed by Wook’s agency, Glorious Entertainment.  Their statement was short and to the point: “The actor [Ji Chang Wook] has been offered and is reviewing several drama and movie scenarios.  This project [“City of Stars”] is just one of them.  As he is still in military service, we are being cautious about mentioning his official activities or schedule.”

The supporting cast is in the process of being selected.  More good news about this potential project is that it will be completely pre-produced, with an episode count to be determined.  Although a network has yet to be announced, the drama is expected to air in the latter half of 2019.  As more news is released, we will update this post accordingly.

Whatever project Ji Chang Wook decides to attach himself to (hopefully after taking a bit of vacation after his discharge), we wish nothing but the best for Wook as he enters the next phase of his stellar (ha!) career!