On the afternoon of 10 June, a movie talk of “Restricted Call” (director Kim Chang Joo) was held on V LIVE with Jo Woo Jin and Lee Jae In, the main characters of the movie, and Ji Chang Wook, a guest who came secretly.  Park Kyung Lim was in charge of hosting the interviews.

“Restricted Call” is a chase thriller featuring thrilling car-chasing set in downtown Busan.  It depicts the story of Sung Kyu (played by Jo Woo Jin), the head of a bank center, falling into crisis when he answers a call from a mysterious caller (played by Ji Chang Wook) on his way to work after dropping his daughter (played by Lee Jae In) and son on their way to school. 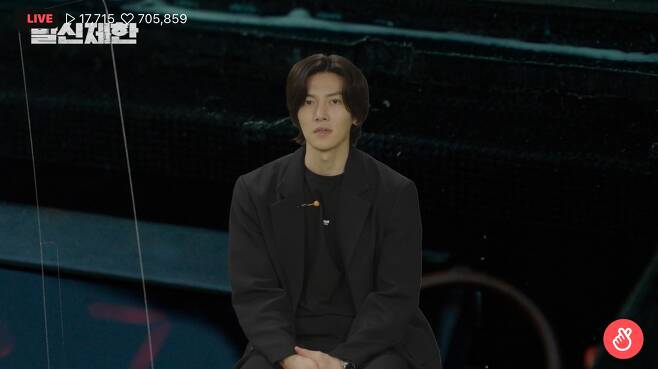 Ji Chang Wook appeared in the middle of the live broadcast as a guest who came secretly.  Park Kyung Lim gave rave praise of his “attractive voice,” to which he replied, “Thank you.”

Asked about his “special appearance,” Ji Chang Wook said, “I am close to the CEO of the production company.  Woo-jin suggested a cameo.  I said I’d do it.  It’d be fun.  I joined because I thought about it.”  [Turning to Jo Woo Jin] “When I saw you from the sidelines, you were having a hard time.  I was sorry that I was so comfortable.  I was always cheering in my heart while filming it.”

In response, Jo Woo Jin said, “Ji Chang Wook’s presence was reliable. I was glad that you decided to appear willingly.” “When I heard about the casting of two people, Ji Chang Wook and Lee Jae In, I felt like I had gained a thousand hearts and minds.” Lee Jae In, who was comfortable speaking with her father (Jo Woo Jin) during the movie talk, could not properly look at Ji Chang Wook next to her and laughed, saying, “I’m ashamed to see him after a long time.”

Various missions were offered. As a result, Ji Chang Wook was penalized for the success of Mission 1 and Mission 3, and the secret missions of Jo Woo Jin and Lee Jae In. Ji Chang Wook showed off his brilliant beauty even with a cat headband and 2D sunglasses. He made an acrostic poem with “Restricted Call”:

“‘Restricted Call’ is finally being released. Are you excited, everyone?

At the end of the live talk, Jo Woo Jin said, “I was happy to be with you today. With the spirit of ‘Restricted Call,’ we worked hard on it. Originally, hidden cards are taken out from the back, but our hidden card, Ji Chang Wook, will feel like they’re penetrating through the heart in front of us,” he said. “Please don’t miss the opportunity to watch the exciting movie, and please pay a lot of attention.”

Lee Jae In said, “We worked hard with great people. I want to convey the energy and effort I felt in the field and the tension expressed by the actors. Please come and watch the movie.” Lastly, Ji Chang Wook said, “It’s a cool movie this summer. I hope you watch the movie.”

Meanwhile, the movie “Restricted Call” will be released on 23 June, where Jo Woo Jin, Lee Jae In, and Ji Chang Wook are expected to perform enthusiastically.

Note: We refer to the Korean translation of “Restricted Call” instead of its English title “Hard Hit.”

Translated from Korean to English by cherkell; there may be slight inaccuracies.  PLEASE DO NOT REPRINT, REPURPOSE, SCREENCAP OR OTHERWISE COPY OUR CONTENT WITHOUT WRITTEN PERMISSION.