“Words like ‘the discovery of Ji Chang Wook’ make me feel embarrassed and ashamed sometimes. But it’s a very good thing. I’m very thankful and happy about it.”

Ji Chang Wook, who portrayed the complex inner self and life of Emperor Ta Hwan in the recently concluded MBC drama “Empress Ki”, has been dubbed as the biggest beneficiary and an unexpected star of the show, and has received praise for demonstrating an acting ability that exceeded expectations.

But in reality, Ji Chang Wook did not know if he was even prepared to play Ta Hwan.

Ji Chang Wook, who came to the audience’s attention through “Smile Donghae”, has taken on different kinds of characters such as a youth, a warrior and an antagonist in shows like “Warrior Baek Dong Soo”, “Bachelor’s Vegetable Store” and “Five Fingers”. Add on his role as Ta Hwan, and viewers now have a “Ji Chang Wook Complete Gift Set” with increased anticipation for Ji Chang Wook’s future works.

Ta Hwan who lived a tumultuous life…“All that he ever wanted was Seung Nyang”.

In the show, Ta Hwan was born as the eldest son of the Yuan Mongolian emperor, but lost his throne to his younger brother amid the officials’ tussle for power and was exiled to Daechong Island in Goryeo. Not knowing when he would die like his father, he lowered himself and acted like a fool.

After he returns to Yuan and is restored to his position as emperor, he harbours feelings of love towards Seung Nyang and later finds his dignity as an emperor with her help. This was a well-rounded character that enabled him to show the immature, majestic and half-insane side of him.

For this, Ji Chang Wook spent much effort on analysing his character and worked hard in order to show his transformation brought about by Seung Nyang. Moreover, although the character was an exciting and well-rounded one, he still worried a lot for the sake of creating a charming character.

Ji Chang Wook had worked hard to abandon the stereotypical image of an emperor. He said, “I got to try many things like not behaving seriously and crossing my legs or sitting with my two feet off the ground.”

“I’m also a weak person with many fears. I think I drew upon and modified these aspects of myself to create Ta Hwan. When I first saw the script, I felt that Ta Hwan seemed immature, cowardly and childish on the outside, but he was a really innocent kid; a kid whom I really wanted to live as. Which was why I was worried if I would be able to portray these properly. I was worried if people would only see Ta Hwan as a fool, but I was able to have fun acting because many people came to like him.”

More importantly, he wanted to give an accurate portrayal of the message that he wished to put across through Ta Hwan’s insanity in the second half of the show.

He said, “If one were to put it easily, I was just acting insane, and all of us usually have a conventional image of what it means to be insane. But I wanted to show precisely ‘why did he become like that? Why did he drink wine and what is it that Ta Hwan wants to say in this unstable state of mind? Why did this child become like that?’ Why did he go crazy, what does he want to do when he’s crazy, what do his words mean and what kind of path is he headed for – these are aspects that may not be apparent to the audience, but I personally wish to be precise in my acting, so these were aspects that I pondered and worried about a lot.”

But alas, what Ta Hwan wanted to say the most was “Seung Nyang”.

“From the start till the end, she was everything to Ta Hwan. It seems that all along, he only wanted to have her, he only thought about her and only had eyes for her. If you look at it, this isn’t the proper kind of love but this is probably something that Ta Hwan would do.”

In the show, the relationship between Golta and Ta Hwan was that of an eunuch and an emperor, but the male couple exuded chemistry through the fantastic pairing of Jo Jae Yoon and Ji Chang Wook.

To this, Ji Chang Wook said, “I call him hyung but we’re like friends. My scenes with Golta were really comical and enjoyable. There were many funny scenes and most of these were ad-libbed. We added on to the basic script and we had fun playing.”

In particular, the scenes where he hit Golta were ad-libs by Ji Chang Wook.

“There were many scenes where Ta Hwan hit Golta. I did so simply because I wanted to hit him. Jae Hyunie hyung also responded interestingly that’s why I’m still alive. The act of hitting seems to accurately portray the relationship between Golta and Ta Hwan. Even though Ta Hwan is an emperor, he has no regard for that and hits him because he has set his face aside. From this, the comfortable relationship between the two is made more apparent.”

Also, he revealed an instance, “There is a line that goes ‘You eunuch with no common sense. You have no common sense and you don’t have anything either.’ I laughed for several days thinking of that line.” 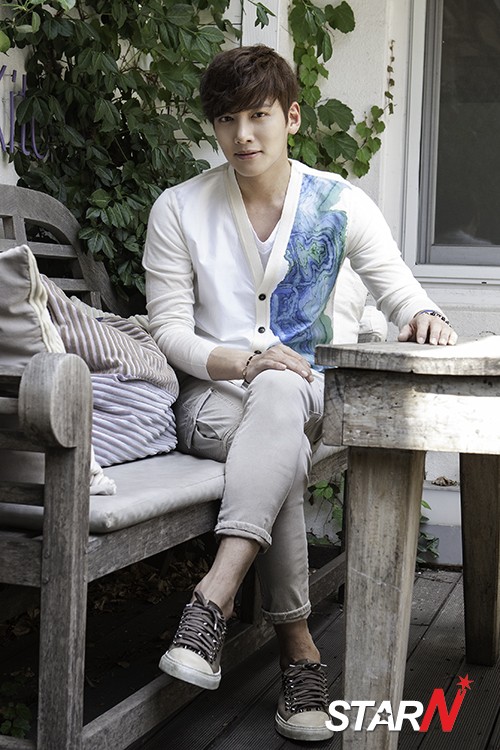 “‘Empress Ki’ is a precious piece of work that I’ve learnt a lot from.”

To Ji Chang Wook, who has been busy preparing for fan meetings since the end of “Empress Ki”, the show is a very precious piece of work.

“As you know, ‘Smile Donghae’ was very successful. At that time, many people said that show was a turning point for me, but I don’t think it was really a turning point like what they said. Having acted all these while until now, even though ‘Smile Donghae’ was successful, I’m still living the same way like before. Although the offers that come to me have changed somewhat, nothing seems to have changed for Ji Chang Wook as a person.”

It is also the same for “Empress Ki”.

“The show ‘Empress Ki’ itself was very good and it was a show that I took on enjoyably. In my memory, I will remember this show with memories like ‘ah, I got to meet good people and had a great time filming back then. That show was very popular back then.’ Every time a show ends, I will experience and learn many things, and after leaving, these will be left as happy memories. This is still a very precious piece of work.”

When asked to envision the image of Ji Chang Wook 10 years later, he said, “I think I will still be the same as right now. I’ll probably still be worrying about my acting. My eyes will probably still light up at the thought of wanting to have fun in another project.”