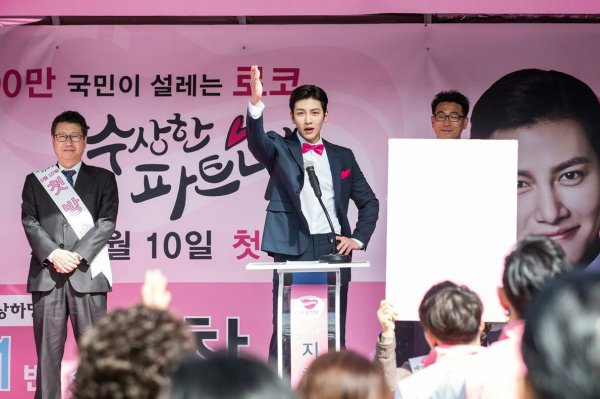 The main cast of SBS’s new drama “Suspicious Partner” made an appearance in Yeouido facing the National Assembly at 8am on 12 April. Ji Chang Wook, who stars as the character Noh Ji Wook, donned a black suit with red tie and appeared alongside Nam Ji Hyun as the female lead Eun Bong Hee, Choi Tae Joon as Ji Eun Hyuk, and Nara as Cha Yoo Jung, who each wore pink and blue costumes. 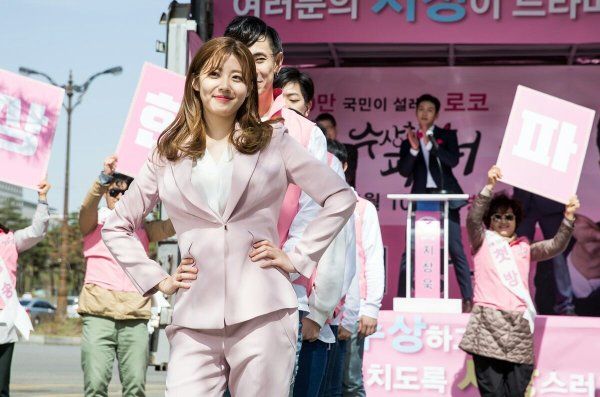 The event took place in the form of a mock electoral campaign, with Ji Chang Wook representing his “Suspicious Party” (the make-believe name of this impromptu political party) as “Actor number 1” (instead of “Candidate number 1” *hee* ).  He stood on pink electoral campaign vehicles emblazoned with banners bearing slogans adapted from political campaigns such as “Everyone’s viewership will change the drama”, “Romantic comedy drama ‘Suspicious Partner’ that will excite 50 million citizens will premiere on 10 May”, and “Suspicious and crazily lovable (drama) that will surprise”.

Following the cue sign from director Park Sun Ho, Ji Chang Wook delivered his charismatic lines, “On 10 May, the day that will completely change the history of Korea, a completely new drama ‘Suspicious Partner’ will begin.”  [Note: 10 May is also the Korean nationwide election date for the country’s National Assembly members.] 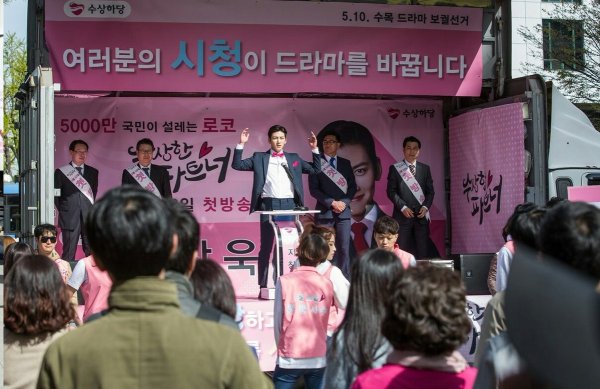 Nam Ji Hyun, Choi Tae Joon and Nara danced along with the rest of the campaign members, throwing in comical ad libs such as “Please tune in”, bringing much laughter to citizens who were on their way to work.

The filming lasted around 4 hours with the National Assembly as the backdrop and generated interest for the drama among many citizens who took videos of them dancing using their phones and uploaded on social media, causing a stir online.

The production team said, “The cast perspired and practised dancing for the sake of the filming of this mock election and dance in front of the National Assembly. They were greatly encouraged that citizens loved it and were able to have fun together. More importantly, please wait a little while to see how this footage will be used and revealed and we will repay you with a video that will surprise you.” 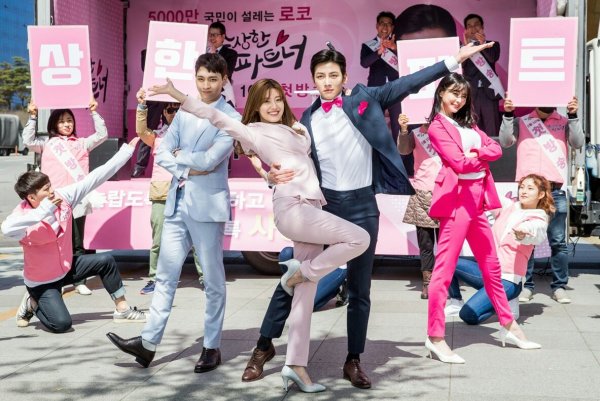 Translated from Korean to English by Gabby.  PLEASE DO NOT REPRINT, REPURPOSE, SCREENCAP OR OTHERWISE COPY OUR CONTENT WITHOUT WRITTEN PERMISSION.